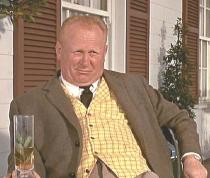 The New Zealand Herald is reporting a very interesting bankruptcy story regarding an Auric Goldfinger (pictured) species of bankrupt who reportedly hoarded gold. The story notes that:
"...the former psychiatrist['s]...suburban home was found to contain millions of dollars of gold and silver bullion and foreign currency on Monday.
But Dr Alan Simpson, 68, was not saying anything yesterday when the Herald on Sunday found him at his Ann St home in suburban Hamilton.
"It's a long and convoluted story," is all he would say about the $4.1m worth police found in three safes when they raided his property.
Simpson said he was gagged because the matter was sub judice. He would make a full disclosure once it had been dealt with by the courts.
An Auckland-based specialist search team made the raid under the Insolvency Cross Border Act. Staff from the New Zealand Insolvency and Trustee Service were also involved.
Simpson, who has lived in New Zealand for 17 years, was declared bankrupt in an English court last September.
He is a former London psychiatrist who was also a Lloyds name - an investor in the giant English insurance company.
Simpson is well known in Hamilton church circles and is a choir singer and church reader at Cathedral Church of St Peter's. A church spokesperson who did not wish to be named said Simpson was "gracious but a somewhat enigmatic character".
"You don't penetrate much below the smile."
The police raid came after United Kingdom-based Steven Williams, appointed trustee of his estate, was tipped off that Simpson had the gold and silver and foreign currency.
There will be a hearing in the High Court at Hamilton on Friday to determine whether the English bankruptcy order can be recognised as a foreign proceeding in New Zealand, and who owns the confiscated bullion.
Last year, the English court found Simpson owed £242,920 ($520,000) to creditors, including interests and costs.
In court documents Simpson said he had lost £1980 ($4200) gambling in the two years before his bankruptcy.
Simpson's Ann St neighbours told the Herald on Sunday he was "a polite gentleman".
All were shocked at the discovery of hidden treasure.
"It came as a surprise to us, as much as anyone else," said one man who had spoken with Simpson during the week. Simpson had apologised to him for "the kerfuffle".
The man noted civil proceedings are under way and the outcome was by no means certain. "All his money might be back in his safe in a few days."
Simpson has been retired since 1998 and stated his only income as a UK pension of £1245 and New Zealand superannuation of $15,408 a year.
His home is owned by a trust of which he is not a beneficiary.
Simpson leads a jet-set lifestyle. A neighbour told the Herald on Sunday Simpson was a huge cricket fan and escaped the damp Waikato winters to spend at least two months each year in England enjoying the summer game."
Picture Credit: http://mjmcx2too.homestead.com/files/villian03.jpg