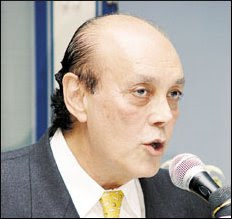 So Mr Asil Nadir (pictured) has returned to face the music from the mutli-million pound collapse of the Polly Peck empire. One of the most interesting aspects of the case (for our purposes) has to be the consequences of his return for creditors of both the fallen companies and the bankrupt Nadir. Mr Nadir is of course still an undischarged bankrupt. The Daily Telegraph have picked up on this point with an interesting article that explores his culpability and his trustee in bankruptcy's many questions. It is noted that:
"The flamboyant businessman has spoken repeatedly about his determination to clear his name nearly two decades after being charged with 66 counts of theft by the Serious Fraud Office.
However, the 69-year-old is also facing a secondary investigation into his affairs, having been never discharged of his bankruptcy status.
Bankruptcy is usually dismissed after a year but because Mr Nadir fled the country in 1993, his status was maintained.
Kevin Hellard, head of the fraud insolvency division at accountants Grant Thornton, is the trustee in bankruptcy of Mr Nadir and responsible for investigating his worth.
He will be seeking an interview with the Polly Peck magnate to examine the extent of the assets Mr Nadir has acquired since he was made bankrupt in 1992.
Thousands of creditors and investors lost money when Polly Peck - once valued at £1.7 billion - collapsed in 1990.
Creditors, including Polly Peck itself, banks, brokers and the Inland Revenue, claim Mr Nadir personally owes them a total of £374.6 million.
The businessman is expected to strongly contest the amount and it will be up to Mr Hellard to decide what monies are owed.
“I need to ascertain the extent of Mr Nadir’s assets in northern Cyprus and work out what is due to his creditors,” he told The Daily Telegraph.
“If he has assets there or anywhere else, I would expect Mr Nadir to release them or reach a settlement with me which acceptable to his creditors.
“When he is in the UK, he is expected to co-operate with the authorities. He has surrendered his passports and will be tagged – it will help to know where he is.”
Mr Hellard – who is the fourth trustee in bankruptcy since Mr Nadir fled – said he expects to be given access to Mr Nadir’s full financial records for the period of his bankruptcy.
He wants Mr Nadir to explain how he can afford to rent a four-storey property in Mayfair which is understood to cost £20,000 a month.
“Seventeen years has elapsed since he was made bankrupt. I need to investigate what appears to be his opulent lifestyle.
“I am very interested in how he is funding his Mayfair flat – it is a question I am entitled to ask.
“He has apparently built up a media empire in northern Cyprus, with property.
“Mr Nadir has a legal obligation to co-operate with the trustee and the trustee can enforce that.
"To the extent that somebody doesn’t co-operate with me, I can go through the courts.
“If that co-operation is not forthcoming, then ultimately you are in contempt of court...."
I am sure there will be more to come on this ongoing saga. Watch this space!
Pictured Credit: http://www.haber.net.kk.tc/haber_resimleri/asil_nadir_0415.jpg