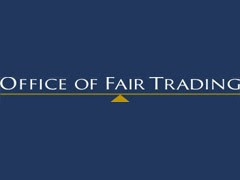 So after seven months of intense work gathering data, interviewing various stakeholders, conducting surveys, analysing statistics, conducting interviews and drafting reports, etc, it  is finally here, namely, the knock out stage of the World Cup. The Office of Fair Trading (OFT - pictured) have also published their long anticipated work into the corporate insolvency market (OFT - "The Market for Insolvency Practitioners - A Market Study", June 2010, pp.104). This third party disinterested critique is to be welcomed, even if some of their findings or research methodologies might not be.
The OFT team presented their work this morning at their Salisbury Square headquarters (see the press release here). It is not an enviable task presenting material to Insolvency Practitioners (IPs) at the best of times, but when you are critiquing their practices and regulatory structure, this astute bunch will hold no punches and critique freely. This is what occurred this morning. Mr John Milsom of KPMG pressed a number of questions on the validity of the statistical samples that the OFT had used to draw some of their conclusions. Mr Milsom also stressed the inappropriateness of using 2006 data (without regression taken into account) to draw conclusions on practices in 2010. Mr Katz of Lancaster University also weighed in with a critique of the data (his work is also cited in the long form report). I am not sure if messrs Milsom and Katz would go so far as to rename the OFT the Office for Flawed [research] Techniques, but they certainly seemed dismayed that conclusions could be drawn from such small representative IP response samples.
There were various other questions, notably from ex-R3 President Mr Peter Sargeant ("So you have not recommended a single RPB?"), Mr Stephen Hunt of Griffins (who may blog separately on the event), and an amusing question from a Scottish IP who asked "Was this research commissioned by the banks?" His principal beef concerned the whole premise of the OFT research and whether it had examined the right question. Floating charges and their effect on bank control he concluded, would have been a preferred area for examination. He has a point of course, and an informed one at that as floating charges do not exist in Scots law.
The OFT employee batted off the questions in a constructive if quiet manner and distilled the 104 page report into an interesting bite size chunk of the main pillars and analysis. The principle findings of the report are:
[the market] "may not work in the best interests of all creditors in over a third of administrations and creditors' voluntary liquidations (CVLs), procedures which together account for 75 per cent of income earned by IPs.


...creditors such as banks, who in effect appoint IPs, have a strong incentive to control fees and direct the activities of IPs in the 63 per cent of cases where there are insufficient funds for secured creditors to recover all their debts.


In the other 37 per cent of cases, secured creditors are paid in full, and their interest in IP fees and actions ceases. In these cases, the OFT found that the remaining, unsecured creditors - such as HMRC, small businesses and customers - are often unable to exert influence on the IP whose actions are then mainly constrained only by regulation and ethics.


The OFT found evidence that IPs charge around nine per cent more, like-for-like, when it is the unsecured creditor who pays, rather than the secured creditor.


The OFT's assessment of the market suggests there may be further problems such as overly long liquidation proceedings and insufficient oversight of the use of pre-packaged administrations...."
The main recommendations of the report are that the following should be considered (with my bold [bracketed] comments]:
" - an industry-funded independent complaints handling body with broad powers to review IP fees and actions, impose fines, and return overcharged fees to creditors [like the Ombudsman that Cork proposed 30 years ago?]

Some critique of the OFT report
Whilst the report is to be generally welcomed and perhaps even acted upon by the Insolvency Service (after due consultation) in parts, there are some issues, other than the statistical work mentioned above, which must be addressed. I will leave a critique of the statistical work to Mr Katz and others better qualified than myself to critique that side of things. I will only mention here briefly a few things which sprang to mind during the course of the session this morning. I will revisit these areas in more depth once I have re-read and digested the full report. First, I thought the OFT's contention that the Insolvency Practices Council (IPC)'s work was mainly on corporate insolvency was just wrong. The IPC's yearly reports and recommendations contain a balance between both sides of the subject, namely corporate and personal.
Secondly, it seems a strange progression of logic to argue that on the one hand an industry is burdened with too much regulation in terms of the number of RPBs, whilst on the other hand, recommending that a new body should be created to deal with complaints and fees. On this last point, the last time I looked an independent body already exists to deal with complaints on practitioner fees, namely the judiciary. Chief Registrar Baister showed this to great effect in the famous Cabletel judgment reducing professional fees from £1.6 million down to circa £80,000.
Thirdly, it could also be argued that the OFT's failure to engage in a single RPB proposal also devalues their overall critique. Their response may well be that a self-regulatory group should decide this for themselves, i.e. whether their should be a total amalgamation of all RPBs into one body, but the nature of self-regulation and the fiefdoms which it creates as well as the added cost and inefficiency pointed out in the OFT's own report, tend to support the idea that self-regulators, like turkeys, do not usually vote for their own demise.


There is no doubt that the OFT carry great weight as a powerful arm of Government that can, for example, punish with a form of one off tax if they find miscreant behaviour. Their views are taken up by the press and influence policy makers and the public alike. I am sure the coming days will bare this out with articles on the supposed "harm" that the current system perpetuates (see the Telegraph's critique here and see the more balanced BBC report here). This OFT influence makes it all the more alarming that some of the issues mentioned above can be cited as alleged flaws in the research.  How well does this critique serve public interest if the effect is to cause a reverse Delaware effect on the insolvency industry? The OFT mentioned today that directors do not trust IPs. This report will only serve to bolster the air of mistrust and suspicion. I wonder how the report will go down in Bloomsbury Street?
Picture Credit: http://www.topnews.in/files/Office-Fair-Trading.jpg