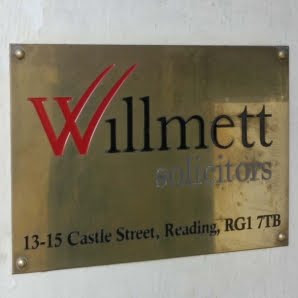 The Insolvency Service (IS) are reporting that a bankrupt solicitor has signed a Bankruptcy Restrictions Undertaking (BRU) for a period of 15 years. The solicitor, Mr Jonathan Gilbert, a conveyancing solicitor from Berkshire (who practiced at the now defunct Willmett solicitors - pictured) caused a £9m loss to his creditors. The IS report that he has agreed to abide by the restrictions for the maximum 15-year period following an investigation by the IS. They go on:

"In signing his undertaking Mr Gilbert, a resident of Windsor, who worked from an office in Maidenhead agreed he had abused the trust of his clients and ‘breached his duties as a practising solicitor’ leading to debts of at least £9m.
Mr Gilbert, who was declared bankrupt in June 2009, had assets of £144,145.00. The major claims against Mr Gilbert related to the receipt and disposal of funds received from a mortgage lender for approximately £4m, and a claim from Willmetts Solicitors, Mr Gilberts previous employers (who have now gone into administration), for almost £5m.
Mr David Gordon the Official Receiver at Cardiff said “The fact Mr Gilbert has agreed to a 15-year bankruptcy restrictions order, the maximum time available, should reassure the public that when bankrupts are found to have acted against the public interest, and in this case abused their professional position The Insolvency Service will take action to impose sanctions against them.”