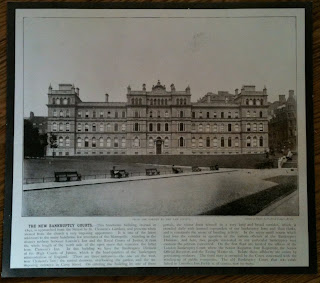 "There are three entrances - the one on the west, near Clement's Inn; the central doorway, overlooking the garden, and the unimposing entrance in Carey Street. On entering the building by one of these portals, the visitor finds himself in a very long and broad corridor, which is crowded daily with learned expounders of our bankruptcy laws and their clerks and is constantly the scene of bustling activity."

The building replaced the old Bankruptcy Court that was established in Lincoln's Inn Fields. The 1892 structure was itself eventually replaced by the Thomas More building. This was necessary as the 1892 building received extensive damage during the Second World War II. For those who now frequent the Thomas More Building on a regular basis, the decision to build anew, as opposed to repair, must be a source of sincere regret.