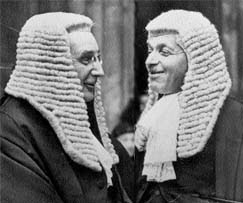 Destitute Dukes, impecunious Earls and broke MPs have been mentioned on this blog before. But what about other members of society? Have any other sectors or professions been affected by debt to any significant degree?For example, how many lawyers have found themselves going to Carey Street? There have been historic examples, including the father of modern insolvency law, but what about in more recent times?
The Lawyer carried a story in 1995 that highlighted the case of a Sussex based barrister who was made bankrupt in 1995. Mr John Mannion was called by the Middle Temple in 1987. He holds and LLB and LLM. Despite his bankruptcy he continued to practise as a barrister at Westgate Chambers in Lewes, East Sussex. He specialised in crime and road traffic law. As the Lawyer noted, "Under the Bar Council's code of conduct no automatic practise ban is imposed on barristers who have been declared bankrupt." His bankruptcy petition was filed by Her Majesty's Customs and Excise. Mr Registrar James heard the case. A Mr John Dennis Mannion continues to practice from Assize Court Chambers in Bristol.
Another Lawyer story appeared in the same year which featured a purportedly bankrupt barrister from the South West. Mr Nigel Heal Askham was a tenant at South Western Chambers in Taunton. He was called in February 1973 by the Inner Temple. He holds an LLB. Mr Askham was declared bankrupt by Mr Registrar Pimm on 4 April 1995. Apparently the order was going to be annulled according to the Lawyer story. I have found no evidence of this to date. The Inland Revenue filed the bankruptcy petition. Mr Askham specialised in criminal, family and personal injury work. He now practices from Octagon Chambers in Taunton in the same areas.
Things go a little differently on foreign shores. At least one bankrupt QC in Australia has been struck off. In England and Wales solicitors are also not immune from this fate, financial embarrassment being much more damaging for that side of the profession as striking off will occur automatically. The rationale for this being that a bankrupt solicitor should not be in charge of third party client account funds. Accountants suffer a similar fate in England and Wales. Is it sustainable that barristers should be exempt from disqualification to practice if they have gone into an insolvency procedure? From the current policy perspective the answer must of course be that barristers should not be disqualified from continuing to practice. The justification is not that they do not hold client account monies but that the nature and function of bankruptcy is to provide relief, but not to write the debtor off for ever. The two cases of Mr Askham and Mr Mannion highlight that bankruptcy can provide a rehabilitative, fresh start mechanism which allows all sections of society, whatever their profession (in part) a second chance. Perhaps MPs, solicitors and accountants should be provided with a similar relief mechanism.
Picture Credit: http://blurblawg.typepad.com/.a/6a00e54f871a9c88330120a61661fd970c-320wi