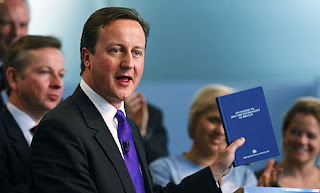 As the election campaign hots up and the various Party's manifestos are published our attention is drawn to the insolvency and related subject material that the parties have put forward for our consideration. There is little of interest in the Labour Party's effort. As Robert Goddard has noted the Labour Party have mulled on issues around corporate governance and company law generally, but there is nothing of interest to insolvency scholars.
The Tories have however dwelt at length on insolvency and in particular the issue of personal debt and the allied issue of "debt fueled consumption." See the full manifesto here. I will pick out some highlights. The Tories have a really interesting and forward thinking proposal in relation to personal debt. They note:

"Going into the recession, Britain’s consumer debt was the highest in the G7. A Conservative government will promote responsible consumer finance by creating a powerful Consumer Protection Agency (CPA) to take over the Financial Services Authority’s consumer protection role. In addition, we will:

• give the CPA new powers to define and ban excessive borrowing rates on store cards;

• introduce a seven-day cooling off period for store cards;

The Liberal Democrats do not seem to have dwelt on any insolvency issues. See their manifesto here. The Greens meanwhile use the term bankruptcy in a much wider sense when they note, "The very way we measure economic ‘success’ today shows the bankruptcy of business as usual."