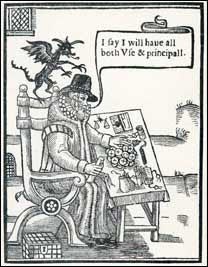 In the modern age we frequently hear of credit cards and other credit facilities being offered with high interest rates. In some cases the levels of interest can be quite staggering. The practice of lending with excessive rates of interest, known as usury, is not new. The early medieval church, “had taught that all lending at interest was sinful.”[1] The church thought that moneylenders were idle and that their gains through lending were sinful as they did not actually do anything to earn the money on the loans they made. There was no physical effort. This position of the church may however have been tempered by the church’s own desire to cause these moneylenders (pictured right) to contribute to the construction and maintenance of church property as a way of atoning for their sinful money lending ways.
As noted above, the church took a dim view of usurious practices. A feature of the credit environment during the seventeenth century[1a] was the lending of monies at excessive rates of interest.[2] The bankruptcy Acts of the early modern period were usually closely accompanied by Acts that regulated usury[3] and there is vast contemporary literature on the subject.[4] There is evidence of lawyers, such as scriveners, engaging in money lending activity.[5] Individual moneylenders, such as Hugh Audley, made vast fortunes from their activities. The practice was criticised for its harmful affects on borrowers.[6] This kind of activity had of course occurred for some time.[7] The first noteworthy statute was enacted in 1235 and was entitled, Usury shall not run against any within Age.[8] It seems however that usury may still be with us.

[2] For an exposition of moves to preclude such activities in the late medieval period see: Seabourne, G. Controlling Commercial Morality in Late Medieval London: The Usury Trials of 1421 (1998) Legal History, vol.19, no.2 (August), pp.116-142.

[4] Fenton, RR. A Treatise of Vsurie, diuided into three bookes, etc. pp.155. Imprinted by Felix Kyngston, for William Apsley, London, 1611; Mosse, M. The Arraignment and Conviction of Usurie. That is, the iniquitie and unlawfulness of usurie, displayed in sixe Sermons. Printed by the Widow Orwin for T. Man: London, 1595; Usurie arraigned and condemned, etc. Printed by WS for J Smethwicke, London, 1625; Culpeper, T. A tract against usurie, etc. T. Leach for Christopher Wilkinson, London, 1668; Usury Stated: being a reply to Mr Jelinger’s ‘Usurer Casr’ Whereto are adjoyned, some animadversions on Mr Bolton’s and Mr Capel’s discourses…written by TP. London, 1679; The case of usury further debated, in a letter to the author of Usury stated, London, 1684; Anonymous. Discourses shewing the many advantages which will accrue by the abatement of usurie. 1668; Anonymous. Case of Usury further debated in a letter to the Author if ‘Usury Stated’. 1684.

[6] Anonymous. Usurie arraigned and condemned or a discoverie of the infinite injuries this kingdom endureth by the unlawful trade of usurie, 1625

James Nicholls said…
The tendency for moneylenders to be usurous is of course still with us. And if you think credit cards are expensive you should look at payday loans and cheque-cashing type loans where the interest rates are in the thousands of percent. I also imagine there is an even worse level below these loan companies where they break your knees if you don't pay.

On the other hand APR calculations are not really appropriate when looking at some lending. On a payday loan of say £500 for a month you might have to pay £100 in fees. That is proportionately a great deal but you have to bear in mind that there are admin costs in setting the thing up, just opening a file at my firm takes about one hour because of all the regulatory red-tape. And many people find that this kind of credit is the only credit they can get quickly and easily.

What is changind and getting gradually easier is bankruptcy. The history of bankruptcy is a pretty harsh and in some instances gory affair but goes all the way back to the Babylonians (circa 2000 BC) and probably before then too.

Bankruptcy now is pretty good. You do not lose your liberty, your job (generally) or even your tv or car and quite often you can hang on to your home (assuming not too much equity in it. So things have moved one a great deal. England is now described as the "bankruptcy brothel" of Europe because we are generally very accommodating for debtors.

The issue though, as with all moral hazard, is whether by getting rid of the stigma and "punishment" it has taken away the incentives to be prudent, careful or even honourable with
our finances. Sounds like a good idea for an essay!
16 March 2010 at 14:40