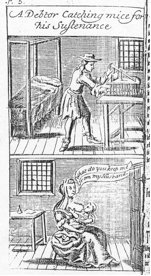 Roger de Poictiers built the Castle of Liverpool,[1] which was used as a debtors prison. This remained the case, until during the reign of George II, when the castle was pulled down. Debtors henceforth resided in the castellated mansion of the Earl of Derby[2]. Pitt describes the prisons physical dimensions in 1690 as being, “sixteen foot in length and twelve foot in breadth, in which was Two Houses of Office, it being one room, and no yard to walk in”[3]. Thomas Morgan was placed in Liverpool debtors’ prison in approximately 1690 for the sum of eleven pounds debt[4]. He was a ‘Chrurgeon’ whose practice had fallen on hard times after he had become lame. Unhappily, his wife came down with the fever and his children with the pox at about the same time as his financial decline[5]. During his year and a quarter confinement Morgan had no bedding or sustenance allowance and was forced to catch mice to stave off starvation.[6] Such privations were not restricted to Morgan, but were also extended to his wife, who upon complaining about Morgan’s confinement with felons and highwaymen was herself imprisoned under close confinement and was restricted from obtaining access to her husband. She and her three month old child also received no allowance and survived solely on the charity of her neighbours.[7] Thomas Row, the gaoler of Liverpool debtors’ prison did not remedy the alleged ill treatment that Morgan had received but instead beat him and put him in irons.[8]

[2] Neild, J, Account of Persons confined for Debt, in the various prisons of England and Wales, ... with their provisionary allowance during confinement; as reported to the Society for the discharge and relief of small Debtors. London, 1800, at page 335.

[3] Pitt, M. The Crye of the Oppressed being a true and tragical account of the unparrallel’d Sufferings of Multitudes of poor Imprisoned Debtors, in most of the Goa’s in England, under the Tyranny of the Goalers, and other Oppressors, lately discovered upon the occasion of this present Act of Grace For the Relief of poor Prisoners fr Debt, or Damages; some of them being not only Iron’d and lodg’d with Hogs, Felons , and Condemn’d Persons, but have had their bones broken; others poisoned and starved to death; others denied the common blessings of nature, as Water to drink, or straw to lodge on; others their Wives and Daughters attempted to by ravish’d; with other Barborous cruelties, not to be parallel’d in any History or Nation: All which is made out by undeniable evidence. Together with the case of the publisher. London, Printed for Moses Pitt and sold by Booksellers of London and Westminster, 1691, at page 4. Pitt’s exposition of the conditions in Liverpool gaol are drawn from a letter he received from a prisoner, Thomas Morgan, on the 7th November 1690.

[6] See the picture to the right of this blog entry which depicts Morgan and his mice catching device.