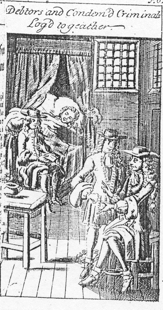 In a short letter, dated 21 November 1690, William Medcalfe outlines the state of Durham gaol, a place where debtor prisoners he contends are, “almost poisoned with our own Dung”[1]. This is apparently due to the fact that the gaoler does not allow the debtor prisoners to use their appointed toilet, or “House of Office”. Medcalfe states that the debtors’ quarters were situated in a room of “Three Yards compass Square”[2]. Small quarters indeed, but smaller still when shared by eight or nine prisoners. Debtor prisoners were also incarcerated in common with felons.

[1] Pitt, M. The Crye of the Oppressed being a true and tragical account of the unparrallel’d Sufferings of Multitudes of poor Imprisoned Debtors, in most of the Goa’s in England, under the Tyranny of the Goalers, and other Oppressors, lately discovered upon the occasion of this present Act of Grace For the Relief of poor Prisoners fr Debt, or Damages; some of them being not only Iron’d and lodg’d with Hogs, Felons , and Condemn’d Persons, but have had their bones broken; others poisoned and starved to death; others denied the common blessings of nature, as Water to drink, or straw to lodge on; others their Wives and Daughters attempted to by ravish’d; with other Barborous cruelties, not to be parallel’d in any History or Nation: All which is made out by undeniable evidence. Together with the case of the publisher. London, Printed for Moses Pitt and sold by Booksellers of London and Westminster, 1691, at page 23.