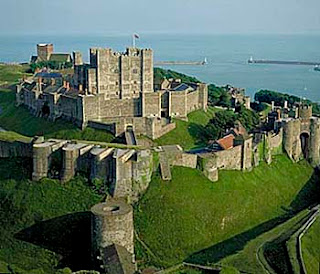 Dover Debtors’ Prison,[1] and Dover Castle (pictured)[2] during its long history once served as gaols for debtors who resided in the Cinque Ports.[3] Neild describes the physical conditions in the Castle in 1805 as being damp and cramped and devoid of fresh air.[4] Pitt's seventeenth century debtor may have experienced much the same privations.[5]

[2] On the history of Dover castle see: Lyon, J. The History of the Town and Port of Dover and of Dover Castle with a short account of the Cinque ports. Longman, London, 1813; and; Puckle, J. The Church and Fortress or Dover Castle. John Henry & James Parker, London, 1864.

[3] Neild, J, Account of Persons confined for Debt, in the various prisons of England and Wales, ... with their provisionary allowance during confinement; as reported to the Society for the discharge and relief of small Debtors. London, 1800, at 165. The Cinque ports are Dover, Hastings, Hythe, Romney and Sandwich.

[4] Neild page 165. Neild’s generosity to the imprisoned debtors in Dover Castle is recorded in: Jones, JB. Dover – A Perambulation of the Town, Port, and Fortress. Dover, 1907, where it is noted at page 113 “Neild’s Charity, £800 3 per cent. Consols, left by James Neild in 1810, to be given in bread to the discharged debtors of Dover Castle prison.”

[5] On Dover generally see: Statham, SPH. The History of the Castle, Town, and Port of Dover. Longmans Green & Co, London, 1899, at Chapter VII.