HOBS: The Provincial Debtors' Prisons - (1) Moses Pitt and the Crye of the Oppressed 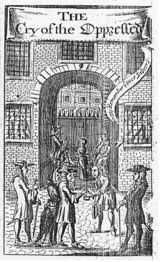 The picture painted by Pitt in his 1691 tract on the state of debtors’ prisons, The Crye of the Oppressed,[1] (pictured right) is primarily an account of conditions in regional debtors’ prisons.[2] Addressed to the Lords and Commons of Parliament, the text was written towards the end of the seventeenth century by a debtor imprisoned in the Fleet[3], Mr Moses Pitt. The tract was a response to the “most gracious” Act For Relief of Poor Prisoners for Debt or Damages, which received Royal assent in 1690, in the second year of the reign of William III and Anne. In his 164 page tract, “as full as tragedies as pages”[4], Pitt provides an exposition of the state of debtors’ prisons during the reign of William III. Motivated by a Christian desire to better the country, the text contains a powerful denunciation of the lamentable condition of debtors’ prisons throughout England and is remarkable for its objective analysis considering its author’s position as an imprisoned insolvent debtor, that most “miserable and oppressed subject”[5]. The tract provides an excellent initial reference point for an exposition of debtors’ prisons in the provinces. The text itself provides a fascinating insight into debtors’ prisons throughout the country[6] and is enlivened with twelve copper plates depicting scenes within some of the prisons discussed Pitt carefully describes how the imprisoned debtors “groan under…starving conditions…and…great oppressions”[7] in their impecunious confinement. The tract is constituted from testimony of imprisoned debtors in the gaols featured. In addition to Pitt’s chosen debtors’ prisons, the exposition contained in this blog will also focus on debtors’ prisons in Canterbury, Dover and Warwick and a number of Coroners courts throughout England and Wales. Pitt discovered some sixty-five debtors’ prisons in England and Wales during his attempts to raise money to finance a new Bill to relieve the plight of insolvent debtors.[8] Some of his findings will be critically evaluated during the course of next week. There will be a post on each of the prisons he examines.

[1] Pitt, M. The Crye of the Oppressed being a true and tragical account of the unparrallel’d Sufferings of Multitudes of poor Imprisoned Debtors, in most of the Goa’s in England, under the Tyranny of the Goalers, and other Oppressors, lately discovered upon the occasion of this present Act of Grace For the Relief of poor Prisoners fr Debt, or Damages; some of them being not only Iron’d and lodg’d with Hogs, Felons , and Condemn’d Persons, but have had their bones broken; others poisoned and starved to death; others denied the common blessings of nature, as Water to drink, or straw to lodge on; others their Wives and Daughters attempted to by ravish’d; with other Barborous cruelties, not to be parallel’d in any History or Nation: All which is made out by undeniable evidence. Together with the case of the publisher. London, Printed for Moses Pitt and sold by Booksellers of London and Westminster, 1691. There are three copies of the tract in the British Library (Shelfmarks: 1418.i.34; T.476.(1.); G.16114. The title page is to the right of this blog entry.

[2] On conditions within different prisons see also: The Case of insolvent debtors confined in the several goals of this Kingdom – some reasons for an Act of Insolvency. London, 1737.

[8] Ibid at preface. Pitt kept a correspondence with sixty-five regional debtors’ prisons at his own expense but did not receive any funding to help towards his debtor emancipation Bill.