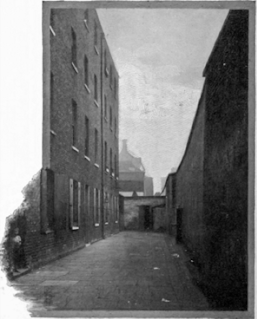 The Marshalsea is the second major Metropolitan debtors' prison that we can examine.[1] John Dickens, Charles' father, was imprisoned for debt in the Marshalsea in the early nineteenth century and it is perhaps because of this that we are most famously aware of the institution.[2] The Court of the Marshalsea’s prison was used as a debtors prison for debtors arrested within twelve miles of the Palace of Westminster, except in the City of London itself.[3] In the sixth year of the reign of Charles I, 1631, a new court of record was established named the Curia Palatti (Palace-Court) to hear personal actions within twelve miles of the King’s palace at Whitehall. Actions for debt were included within the jurisdiction of this court. The Marshalsea was situated in the Borough of Southwark.

[1] On the history of the Marshalsea see: Anonymous. An Essay Towards An History of the Ancient Jurisdiction of the Marshalsea of the Kings House to which is subjoined an Account of the Court of the Palace of the King at Westminster, created by letters patent of King Charles II, London, Printed for W. Clarke and Sons, Law Booksellers, Portugal Street, Lincoln’s Inn. 1812.

[5] Chester City Quarter Sessions - Ref. QSE/2/24 – date Dec 23 1570 – examination of an escaped debtor from the Marshalsee; Dorset Record Office - Ref. D/WLC/L18 – 1658 – Case of Humphrey Weld and Stephen Switzer v. Sir Jn.Lenthall. They allege that a debtor, Chas. Canffield, was allowed to escape by Lenthall, so that an action of escape could be brought against them, as they were bound £3,000 for his continuance as a prisoner.