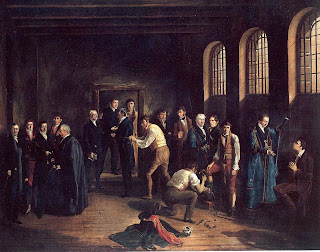 For any proper consideration of the history of our subject it is important to keep in mind the separate jurisdictions of bankruptcy and imprisonment for debt. Any student of the subject must be mindful of the two very different jurisdictions that existed to administer the estates of individuals who fell foul of contracts for the extension of credit. This division has long been recognised.[1] On the one hand we have the merchant class, or traders,[2] whose activities on the breakdown of the credit relationship largely fell within the ambit of the bankruptcy statutes. On the other hand, we have the non-trader class of insolvents,[3] whose fate lay in the infamous debtors’ prisons, or as Oldham has noted, those who, “operated in the shadow of debtor’s prison.”[4] These two routes could be the fate of a natural person. The regulation of the insolvent estates of the juristic person falls without the scope of this blog entry.[5] The jurisdictions were not mutually exclusive however, and bankrupts were on occasion imprisoned.[6] The notorious debtors’ prisons, so famously described by Dickens,[7] usually constitute our contemporary understanding of debtor treatment in past ages.[8] However, whilst debtors’ prisons were extant from the medieval period, various other treatments were meted out to individuals who could not satisfy their creditors.

The first key distinction to be borne in mind when considering the history of personal insolvency, is that from 1570 until 1861,[9] two separate jurisdictions existed to regulate the management of insolvent estates of individuals. On the one hand, there was the bankruptcy jurisdiction that was introduced in 1542.[10] This set of rules applied in practice solely to trader debtors, i.e. you could only seek redress to the bankruptcy laws if you were a trader, although the jurisdiction was available to non-traders between 1542 and 1570. The plight of the non-trader was to suffer the sometimes-harsh conditions of debtors’ prisons. There were various calls to bring the two jurisdictions together, including Parkes who noted in 1828:

“The Insolvent Laws are also notoriously defective in their principle and administration; and it may become a serious consideration with the Legislature, whether the Bankrupt and Insolvent Acts may not be better administered under an entirely new and joint jurisdiction.”[11]

Tomorrow we will consider one of the key determinants of debtor treatment, namely the definition of 'trader.' This was an important term of art. If a debtor was accounted a trader he fell within the bankruptcy statutes.

[1] See for example Sturges v. Croninshield (1819) 4 Wheaton 122, a case heard in the United States Supreme Court. I am grateful to Professor David Graham QC on this point.

[4] Oldham, J. (Ed). The Mansfield Manuscripts and the Growth of English Law in the Eighteenth Century. Volume One. The University of North Carolina Press. Chapel Hill and London, 1992, at page 402.

[6] See for example: Anonymous. The Case of Persons in Prison who are under Commissions of Bankruptcy (with reference to a proposed insolvent Act). London. 1755. See also: Cornish, W.R & Clark, GN. Law and Society in England 1750-1950. Sweet & Maxwell, London. 1989, page 228, who observe that, “the danger of being thrown into debtor’s prison loomed over all credit transactions.”

[8] Whether or not imprisonment for debt still exists is an interesting questions. See further: Yeomans, F. Imprisonment for Debt. County Court Officer, vo.39, no.7, 29th October 1965.

[9] There is one caveat to this supposed end to the trader/non-trader division. As Fletcher has noted (Fletcher, I.F. The Law of Insolvency. 2nd Edition. Sweet & Maxwell Ltd. London, 1996, at page 8) the Law Reform (Married Women and Tortfeasors) Act 1935 abolished the anomaly (or as he puts it ‘curiosity’) that a married woman could only be made a bankrupt in English law if she engaged in trade. From 1861 until 1935 the ‘married woman trader anomaly’ existed for some seventy-four years.

[10] See the previous blog post on statute dating (here) for a discussion of the convention that early modern statutes were referred to in a date sense by reference to the first day of the relevant parliamentary session in which they were enacted. This affects the first bankruptcy statute as it came into force in 1543, but the convention pre-dates it to 1542 as it was in this year that the relevant parliamentary session commenced. In this blog the statute is therefore referred to as the statute of 1542, whereas the commencement of its effect is referred to as beginning in 1543, the year in which it actually came about.

[11] Parkes, J. A History of the Court of Chancery; with practical remarks on the recent commission, report, and evidence, and on the means of improving the administration of Justice in the English Courts of Equity. London, 1828, page 420. On the history of the Chancery court and for an exposition of its different roles over different time periods see also: Haskett, TS. The Medieval English Court of Chancery (1996) Law and History Review, vol.14, no.2. pp.245-31. See also Jones, WJ. The Elizabethan Court of Chancery. OUP, Oxford, 1967.