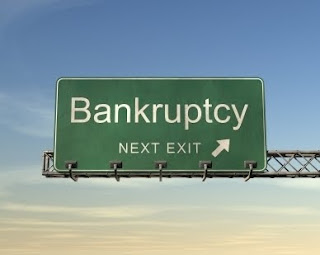 “Save up to go bust? With the Insolvency Service raising bankruptcy costs by £90 the price of going bust has never been so high, standing at £600 all in, including court fees. However, when the cost of bankruptcy is seen in context of the average bankrupt’s unsecured debts, this is still ‘value for money’ for the debtor. £600 is just 2% of the average amount of unsecured debt which stands at £33,000. In fact it actually costs the Insolvency Service £1,715 to administer and investigate a bankruptcy, recoverable on asset realisations, although sometimes this won’t get paid.

The higher charge has been introduced to ensure that bankruptcy costs don’t come out of the public purse and fund the Insolvency Service, which has never seen such a high demand for its ‘unwanted’ services.

There is better news for those who can't afford bankruptcy and have debts of less than £15,000, as it is proposed to allow them access to the Debt Relief Order process, costing less than £100, even if they have a small pension.

For those with larger debts, it does cost money to go bankrupt but that could be money well spent, providing peace of mind and marking a line in the sand.”

R3 highlight an incredibly important point that has been discussed judicially (R. v Lord Chancellor Ex p. Lightfoot [2000] Q.B. 597) and in academic empirical work. In the Bankruptcy Courts Survey (BCS) a number of bankrupt respondents came back specifically on the subject of entry costs. The report noted:

"The issue of entry costs to the procedure did arise in numerous responses. One Newcastle debtor’s response to this question is worth quoting in full, “I would only say that people who like me are to be come bankrupt that £310 to be paid should be squashed, as I had to borrow this money off a friend and I am having to pay this back at £10 afortnight.”[1] Another Newcastle debtor noted, “it took a long time to fill in form’s then to find out that some of the forms were missing/and cost to much money had to borrow money to go bankruptcy”[2] Another observed, “finding money to pay for bankruptcy was hard.”[3] A Croydon respondent noted, “The only thing which I found stupid was I had to pay £300 pounds to declare bankruptcy which is hard to find when you have no money.”[4] Another Croydon respondent noted, “depending on their circumstances to think long and hard about all the alternatives then, if you can afford it do it (I had to borrow the money from my son.)”[5] An Exeter respondent noted, “what is relevant is that it cost me over £300 to officially declare I was f**king skint!!!!! No sense!”[6] A Birmingham respondent noted, “…strange to have to find a sum of money to go through the process.”[7] Another Birmingham respondent noted, “I had enough trouble finding the fees let alone the cost of a solicitor.”[8] Overall the 8% figure for respondents concerned with cost barriers does not seem to suggest that there is an overall issue regarding barriers to entry to the bankruptcy system. However, if the bankruptcy procedure is not, “cheap enough to be generally used, or at any rate used in good time”[9] then its efficacy may be questioned as it is amongst some respondent bankrupts. One Reading respondent did observe that the exit costs were too much when they noted, “Charges, particularly for discharge certificates are very high.”[10]

As R3 note (highlighted above in bold), bankruptcy entry cost is already heavily subsidised by the Insolvency Service. It could also be argued that the bankrupt is also getting something in exchange for entry cost, i.e. substantial debt write off.

Jonathan said…
Irish Liquidations - liquidation and insolvency experts based in Dublin said they had noticed a significant increase in the quotes that clients were recieving from other parties.
12 March 2010 at 12:26