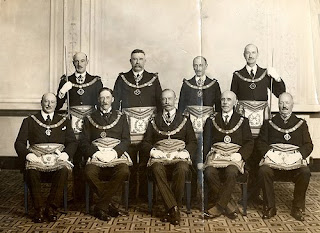 The primary purpose of this blog is to provide an updating mechanism for my company law and insolvency law students. The case cited in this entry might provide a very salutary lesson indeed as it involves a University as a petitioning creditor. Debtor students beware! The case also involves allegations of freemasonry (some builders are pictured), claims against Lord Irvine of Lairg and Sir Paul Stephens, as well as defamation. It is no exaggeration to say that the case has it all!
In Re Moghadam (a Bankrupt) (No. BK-1998-No.3816, High Court of Justice Chancery Division Bankruptcy Court, 26 October 2000,2000 WL 33122459) Mr.Registrar Jaques had to consider an application made under s.282(1)(a) of the Insolvency Act 1986, "which provides that the court may annul a bankruptcy order if it at any time appears to the court that, on any grounds existing at the time the order was made, the order ought not to have been made."
Thames Valley University (TVU) were the petitioning creditor on whose petition the bankruptcy order was made. The debts involved related to costs orders totaling £4993.40 in relation to defamation proceedings brought by Mr. Moghadam against TVU. Mr Moghadam brought the action against TVU relating to alleged defamatory comments made against him during his HND course.. TVU presented a petition to this court on 1st June 1998 based on those judgment debts of £7,731. The case involved some interesting affidavits, including the following:

“1. Freemason organisation on behalf of one of their member who is on the Board of Governor of TVU [I interpose to say that is Thames Valley University] have interfered with judicial process and I am no longer prepared to pursue my case against TVU and I am suing the Lord Chancellor. Exhibit ONE.”
Exhibit 1 is a photocopy of the front page of a claim form issued out of the Queen's Bench Division of the High Court, naming two defendants: Lord Irvine, the Lord Chancellor, is the first defendant; and Sir John Stevens, the Police Commissioner, is the second defendant; and the details of the claim are.."

“3. Freemason Organisation and TVU were desperately trying to avoid a scandal and possible the TVU bankruptcy.
“Dr. Mike Fitzgerald (TVU Chancellor) finally resigned in mid October 1998 when I fully exposed his criminal activity to the National Union of Students.”

In relation to the above the learned judge notes: "I have heard what Mr. Moghadam has to say about the machinations of the Thames Valley University and the machinations of the Freemasons' Society. I am surprised that there can be any question of the matter still being extant...Many things I am willing to believe; but I find it hard to believe that the application for leave to appeal is still on the stocks, and if it is not, it seems to me that the foundation for Mr. Moghadam's application today falls away."
Registrar Jaques concludes: "The evidence that he put before the court in support of the application does not begin to justify the conclusion that the bankruptcy order ought not to have been made; and it would be a travesty of justice, it seems to me (although I suspect it will not seem so to Mr. Moghadam) to allow what I consider to be a hopeless application to remain on the file as an adjourned matter, whilst Mr. Moghadam seeks to produce more documentary evidence. He has had two years to do so. He has not done so. The material that he has produced does not begin to satisfy me that the bankruptcy order that was made ought not to have been made; and I repeat, it is based on orders of the court, which have not been appealed, and there is nothing to indicate that anything has happened by way of appeal since November 1997. In those circumstances I consider that the proper course for me to take is to dismiss this application as a hopeless application."
Picture Credit: http://content.artofmanliness.com/uploads/2008/10/freemason.jpg