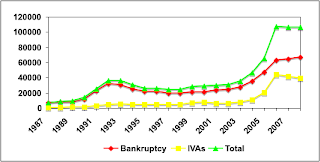 Whilst covering Dr Gordon Brown MP this week at Prime Minister's Questions, the Rt Hon Harriet Harman QC MP strayed onto the topic of bankruptcy. In response to a statement by the Rt Hon William Hague MP on the the US bank bailout attempts, Ms Harman noted (Hansard, 27 Jan 2010 : Column 804):

Is this bankruptcy claim true? To assess this we must revisit Mr Hague's ministerial career. He was last in power in 1997. Before his party was ousted he held the following ministerial positions:
So Mr Hague held ministerial office between 1990 and 1997, a period of seven years. The table included to the right, which includes figures drawn from the Insolvency Service statistics database, notes that the total number of bankruptcies over that period per year was:
The total figure for bankruptcies in 2008 (the last total year data available) was 67,428. Even in Mr Hague's worst bankruptcy year his administration achieved a relatively lowly 32,106.That is half Harriet's figure for her peak year to date. Even a brief view of the statistics reveals that Ms Harman is clearly wrong. How on earth can it be the case that the Leader of the House of Commons, whilst sanding in for the Prime Minister, can cite statistics in this manner?
Picture Credit: Insolvency Service.

Adrian Walters said…
Probably worth checking the comparable figures for liquidations. Being charitable it could be that HH was referring to bankruptcies in the US sense, i.e. including corporates. Even so, off the top of my head, I can't imagine there will be any radical difference for the figures for liquidations during the last recession and during this one. Best wishes.
29 January 2010 at 08:33

kingstonpeople said…
HH is bad at basic statistics. We all know this from the rubbish she sprouted last year about the difference in working men and women's wages. Therefore anything she says involving figures should be ignored.
30 January 2010 at 00:55

Anonymous said…
This comment was not meant to be on bankruptcies but instead on company liquidations. Insolvency Service data gives a liquidation rate in the early nineties of 2.7% [liquidations against active companies] whereas the latest figures on the insolvency service website has the rate at 0.9%
1 February 2010 at 10:18