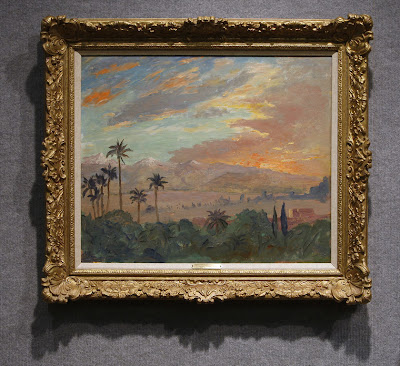 I attended the R3 (Association of Business Recovery Professionals) Annual Parliamentary Reception on Wednesday evening (18 November 2009) at the Palace of Westminster. It was a very interesting and informative event. The reception was held in the Churchill Room, a magnificent space dedicated to the memory of Sir Winston Churchill, the scion of the great Spencer/ Churchill/Marlborough dynasty. Some of the war time leader's (or Duke that never was!) paintings were hanging on the walls of the room (sample pictured right). There was also access to the Peers' Terrace which afforded magnificent views over the Thames and along Sir Charles Barry (1795-1860) and his assistant Augustus Welby Pugin's (1812-52) magnificent building.
There was a good mix of interested parties at the event including members of the judiciary, solicitors, insolvency practitioners (IPs), Members of Parliament (including, inter alia, Mr Keith Vaz MP and Mr Paul Keetch MP), as well as two academics (myself and Dr Sandra Frisby). There may have also been some barristers, but I did not speak to any.
The President's speech was most informative about the work of R3 going forward. It was not quite as wide ranging as the Queen's Speech which had taken place in the same building some hours earlier. Mr Sargent mentioned a number of initiatives that R3 have in mind. I was most interested in his comments on debtor education and the increasing role of IPs in the area. Their philanthropic work in this important area is to be applauded. I am glad my commissioned research by the Insolvency Service (see here and here) and published articles in Insolvency Intelligence on the subject of debtor education (see here and here) have been read by someone! It is indeed a laudable aim that R3 are increasing the participation of IPs in debtor education. As the President pointed out - who else is better placed to pass on knowledge regarding financial awareness and the pitfalls of insolvency than IPs!
Picture Credit: http://www.abc.net.au/reslib/200804/r243809_992642.jpg