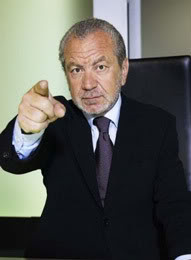 The Times has published a very interesting article entitled, "Lord Sugar: struggling bosses are ‘moaners’ who 'live in Disneyland.'" In what could be good news for Insolvency Practitioners (IPs) the article reports that the Lord Sugar (pictured) has been less than sweet in relation to struggling small businesses. He has called them "moaners... in Disneyland." It is not the location of the struggling business, or their erstwhile bosses, that is of note, but their solvency as defined by the noble Lord. In a very broad application of his own version of s.123 IA86 Lord Sugar has apparently observed:

"Don’t just talk to me in inverted commas about ‘banks being horrible and nasty.’ Regretfully, when we delve into some examples of the companies that have gone to them saying lend me some money I wouldn’t lend them one penny...They are bust. The moaners are bust. They are bust and they don’t need the bank — they need an insolvency practitioner."

Whilst this may be sound advice it is hoped that the relevant IP will be conversant with the rescue culture ethos, unlike the Lord Sugar who is the Government's Enterprise Champion. He made these comments whilst in Manchester discussing viable business lending practices.