Bankruptcy in the game of Monopoly - the subject as leisure 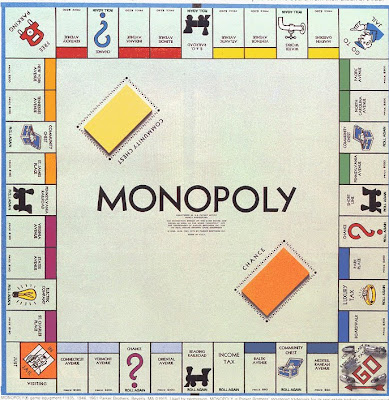 Whilst playing Monoploy on the Nintendo Wii with my five year old goddaughter on Saturday (I had just lost to her on MarioKart; as a four year old she beat me at Tiger Woods golf as well, all very embarassing) I under bid her in an auction for Bond Street which eventually exhausted all her funds. She was given the option of 'Filing for Bankruptcy' by the computer version of the game. The game is made by Hasbro, an American company, which can trace its early beginnings to Providence, Rhode Island. This might explain the language use. Petitioning for bankruptcy in this context might not sound that attractive to the gaming public!
My five year old monopoly opponent chose the bankruptcy option and I won the game. I am still of course two/one down in the gaming stakes, but you have to take your victories where you can. There was no mention of a discharge so she is still a Monopoly bankrupt. This was an interesting example of the legal state of bankruptcy featuring in games. The non-electronic version of Monopoly has a bankruptcy rule. The rules note: "If you ever owe the Bank or another player more cash than you have, try to raise the money by selling buildings and/or mortgaging properties [or by stealing it from the bank whilst the banker is distracted, or embezzling it from the bank if you are the banker! - my own rule] If you still owe more than you have, you are BANKRUPT and out of the game!"
I have an American playing card game called "Bankruptcy" which involves bull and bear market cards. It is quite fun, more fun than getting beaten by a five year old at MarioKart! She must have cheated.
Picture Credit: http://www.360sync.com/wp-content/uploads/2008/02/monopoly.jpg