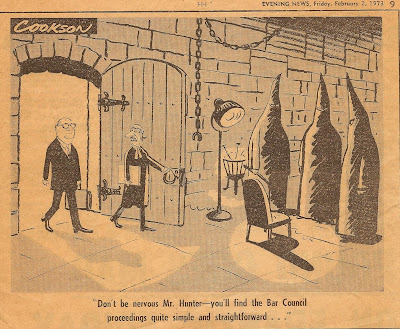 One of the most interesting elements of the Poulson affair relates to the Government’s reaction to the revelations that were coming out of the Wakefield County court as a result of Poulson’s public examination. A growing sense of indignation manifested by the political establishment seems to have resulted in the then Attorney-General, Sir Peter Rawlinson (as he then was, he was subsequently enobled as Lord Rawlinson) getting involved in the Poulson case. The President of the Board of Trade and the Attorney-General appeared, represented by counsel, in the Wakefield County Court, without prior warning. This is a grave breach of professional etiquette. They were there to demand that the public examination of Poulson should be stopped on the grounds of “public interest”. However, despite the eminence of the applicants, the presiding registrar, Mr Registrar Garside, summarily refused the applications, and directed the examination to continue.

Some powerful enemies among the establishment had clearly been made, among people implicated by Poulson’s evidence, and their political colleagues and friends, and in particular within the Cabinet itself, as a result of the fall of Reginald Maudling. But does this account for what followed next?

The Attorney-General reported Hunter, the leading bankruptcy Queen’s Counsel of the day, to the Bar Council for professional misconduct. The obvious consequence of this move would be to curtail the public examination, at least by Hunter. Hunter was represented at the hearing by Sir Derek Walker-Smith QC, subsequently Lord Broxbourne QC (13 April 1910 – 22 January 1992) the senior Conservative Party politician (and barrister!). The Lord Broxbourne was, like Hunter, a graduate of Christ Church, Oxford. The complaint to the Bar Council was dismissed within short order. This episode did not however prevent Hunter from becoming soon afterwards a Bencher at Gray's Inn.