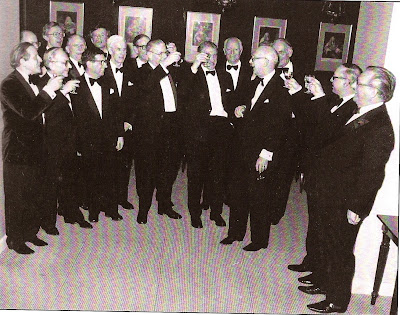 The Cork Report is seen by many as the seminal reform document in English insolvency law. The full citation is etched on the brains of many an insolvency scholar -  Insolvency Law and Practice, Report of the Review Committee. Cmnd 8558. HMSO, London, 1982. It is an interesting exercise to mull on the make up of the committee and their day to day workings. I have recently come into the possession of a photograph that helps aid the task of reconstruction, or at least a reconstruction of their final celebration! My sources tell me that the celebration took place at the Reform Club, (where Geoffrey Drain was a member) although this does not account for the judicial portraits in the background. The meetings of both Cork Committees mostly took place at the then offices of the Official Receiver in Bunhill Row, in the City of London, close to the local head quarters of the Honorable Artillery Company (HAC). David Graham usually enjoyed egg and chips and a few biscuits which did nothing for his health. One day the committee was informed that it would no longer be possible to lunch at Bunhill Row since the canteen had become insolvent! Thereafter lunch was taken, frequently preceded by a walk through the famous Bunhill Row cemetery at the HAC.
The Cork Committee was made up of:
The co-opted members of the committee were:
Picture Credit: University College London and Herbert Smith.

Anonymous said…
It's actually in Bentham House, the UCL Faculty of Laws, presumably hence the photo credit.
16 April 2010 at 05:30