Phoenix four undertake not to act as Directors - are the periods sufficiently lengthy? 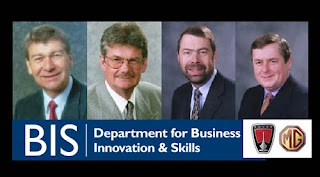 It has been announced (and reported) that the 'Phoenix Four' (Peter Beale, Nick Stephenson, John Edwards and John Towers - pictured) have undertaken not to act as company directors for between three and six years. MG Rover collapsed in 2005 with debts of £1.3bn and with the loss of 6,000 jobs. The directors have allegedly trousered £40 million each in remuneration as part of their role in the failed company.
You will remember that Mr Justice Newey's comprehensive report into the affair cost some £15 million. The disqualification periods are between three and five years, i.e.
This might not seem particularly severe on the Re Sevenoaks Stationers scale (maximum of 15 years) - plenty of time to spend £40 million the creditors and employees might think! Some money has however been saved in reaching this compromise - there might not have been much left after the £15 million report! Mr Edward Davey MP, Minister with responsibility for corporate governance and company law said:
“These disqualification undertakings represent a successful conclusion to a lengthy and complex investigation into the collapse of MG Rover. Peter Beale, John Towers, Nick Stephenson and John Edwards have each been banned from being involved in the management of any company for several years. The outcome of this case serves as an important reminder that unacceptable conduct by company directors can result in lengthy periods of disqualification.”

The Mirror has published an interesting "where are they now" piece on the four directors. The article notes:


Stephenson, 62, has fled to Florida where he's landed another lucrative job in the car industry.


He has been banned from being a director in the UK for five years, but this will not will affect his life by the beach across the Atlantic.


During his time at MG Rover, married Stephenson had an affair with a Chinese consultant called Dr Qu Li. As far as many fellow executives were concerned, she was simply an interpreter.


But, on at least one business trip to China, it was clear the relationship went further.


Dr Li was paid £1.69million for 15 months of consultancy services to MG Rover Group. The affair was documented in the 830-page report into the scandal, which said her fees were "excessive".


Between 2000 and 2005, he took on directorships at other firms, including Mira, which MG Rover contracted for consultancy serv-ices worth nearly £2.4million in 2001 and 2002. Stephenson, who made £8.9million from MG Rover and Phoenix Holdings, lived in a converted bakery near Birmingham at the time of Rover's collapse. He sold it for £395,000 in 2010.


A source said: "Nick was the geeky one. He was into car design and liked drag racing at the weekend."


He lived in a lavish £1.3million home, owned expensive supercars and two small Cessna planes, despite not having a pilot's licence.


Edwards started out at the family firm - his father's Rover franchise, Edwards Cars.


A former associate said: "All he has ever craved is extreme wealth. To him, Rover has always been a cash cow. His attitude will be, 'I took a risk £9M and I deserve the payback'."


He now lives in a nine-bed country pile with wife Mari-anne, 68, in the Cotswolds. He has been struck off as a director for three years and works for an engineering consultancy in the UK.


Towers was the natural leader of the Phoenix Four.


The 63-year-old, who has been disqualified as a director for five years, is refurbishing a £1.5million 450-acre retreat in the south of France with second wife Beth, 49.


The rolling estate, an hour from Toulouse, has a fine hunting lodge as its centre-piece and even includes its own deer herd.


Keen golfer Towers also owns a £1.5million apartment in a golf resort on "Million-aires' Row" in the Algarve and has a £650,000 home in Bourton-on-Dunsmore, Warks. He joined Rover in 1988 and quickly moved through the ranks, before becoming chief executive in 1991.


In 1994 he tried to arrange a buyout, with Honda, from then-owner British Aerospace. But the company was sold to BMW instead and Towers quit in 1996. He returned to Rover in 2000 with the Phoenix takeover. Between 2000 and 2005, Towers took home £8.9million in pay, pensions and bonuses.


A Range Rover is parked on the driveway behind metal gates and a 6ft fence which surrounds the country pile in Dunhampstead, Worcs.


After the car firm's collapse, it emerged Beale picked up £8.981million during his time at MG Rover and Phoenix.


He was a partner at an accountancy firm before joining Edwards' dealership as finance director in 1989.


Beale has been slapped with a six-year ban from being a director but has already retired.


He received a longer ban than the others because he was found to have wiped company records from his computer just a day after the investiga-tion into Rover's demise was set up.