March 03, 2011
Whilst reading Professor Bridge's "The Quistclose Trust in a World of Secured Transactions" (1992) OJLS, vol.12, no.3, p.333, I noticed that this paper was originally given at the WG Hart Legal Workshop on Insolvency Law at the IALS (pictured), London, between 2-4 July 1991. I thought I would try and investigate what else was discussed at the conference. So far I have only been able to track down the advertising material for the event and the attendee list and a couple of citations. Professor Rajak and Professor Clarke provided the following advertising material: 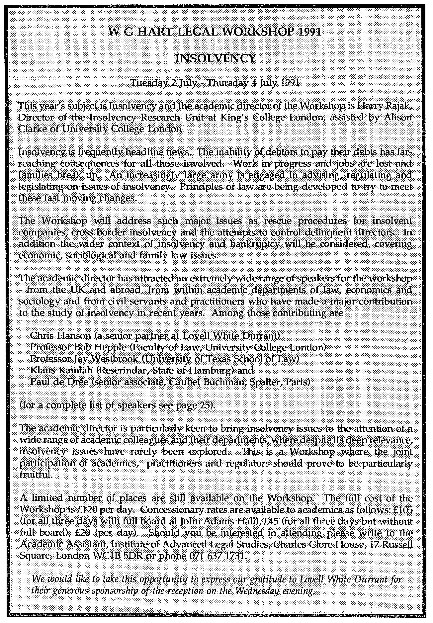 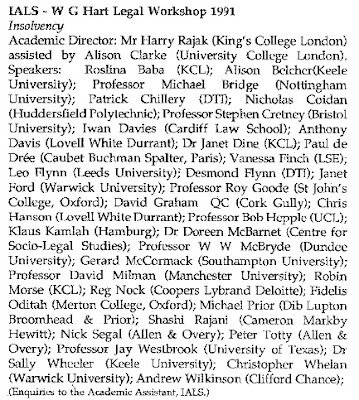 In addition to Professor Bridge's paper (originally: “Equitable Assistance in the Search for Security”) there was also:
The foreword of which notes: "The worldwide depression of the 1990s, coupled with the reforms to insolvency law in the UK, has brought about the need for a better understanding of the way in which the insolvency process operates. A critique on insolvency law, this book relates that analysis to the real issues faced by practitioners who deal with domestic or foreign cases. Subjects covered in the volume are wide-ranging and include personal insolvency and family law; retention of title; cross-border issues; and rescue of insolvent companies. The examination of the last of these areas brings together the approaches of several jurisdictions outside the UK to the issues of when insolvent companies or those heading for insolvency should be saved from liquidation. As an example, knowledge of the procedure for company rescue under Chapter 11 of the US Bankruptcy Code is essential if a practitioner is to advise on the problems of collapse of a multi-national conglomerate. This collection of papers was originally presented as part of the W.G. Hart Workshop on Insolvency Law given at the Institute of Advanced Legal Studies in July 1991. The papers have been edited and updated to form this work on the operation of the insolvency process in the UK and abroad."