Some insolvency items in the news - Farepak, UB40, Redmond and Goode 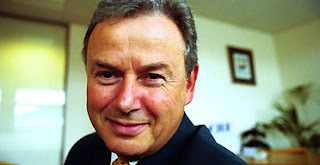 There are a number of interesting insolvency issues percolating through in the news at the moment. The most interesting is perhaps the Farepak case. The story of how the Official Receiver is seeking to disqualify nine directors of the failed hamper company is set to cause a stir for weeks to come, not least because one of the directors in question is Sir Clive Thompson (pictured right) the former CBI boss. 'Sir' Jack Lyons had his knighthood and CBE removed following some dubious business activity - what the judge called "dishonesty on a major scale". Dishonesty is not the same as 'unfit' (pursuant to the Company Directors Disqualification Act 1986, s.6) but will knighthood removal occur with Sir Clive? We will have to wait and see what the evidence of unfitness is. It could of course be dishonesty as with 'Sir' Jack. Whatever it is Sir Clive will have to hope that his actions do not fall within the rules on forfeiture otherwise Lady Thompson will have to revert to plain old 'Mrs.' The other allegedly unfit directors are:

Times are also a bit tough for the band mates in UB40. Five of their number are to face insolvency proceedings in the Birmingham County Court. Another famous individual has found out that he could not run away from his debts. Derek Redmond, the former 400-metre runner, has been declared bankrupt.
Meanwhile the BBC are reporting that debt advisors are to receive a reprieve in relation to their funding. The Treasury Minister noted, "Effective debt advice can be the first step towards regaining control of your finances. It can also help people to make the most of their money in the future and avoid unsustainable debts. The government intends to put the provision of debt advice onto a more sustainable footing. We want to see a flexible and cost effective response to debt problems, so that people can be helped in a way that works for them."

Finally, Professor Sir Roy Goode QC (pictured left), "the Stephen Hawking of English commercial law" (according to Look Chan Ho - see [2006] EBLR 1729) is due to hand out some prizes at the University of East Anglia this month. The title to his accompanying lecture has yet to be released.
Picture Credit: http://static.guim.co.uk/sys-images/Business/Pix/pictures/2006/11/24/thompson372.jpg & http://2.bp.blogspot.com/_YrPhWhp-AW0/TLSJkCPbeRI/AAAAAAAABXM/MwFca9DlMzk/s1600/SirRoyGoode.jpg