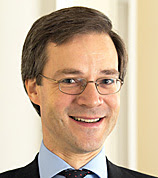 Mr Justice Newey (pictured) has handed down his judgment in Connock & Anor v Fantozzi, Re Alitalia Linee Aeree Italiane SPA [2011] EWHC 15 (Ch) (18 January 2011). The case concerns the relationship between (a) "secondary proceedings", as defined in the EC Regulation on Insolvency Proceedings 1346/2000 ("the Insolvency Regulation"), opened in this jurisdiction and (b) insolvency proceedings in respect of the same company opened in the member state of the European Union (here, Italy) in which the company's "centre of main interests" (or "COMI") was situated. As the learned judge notes, "The particular point raised by the case is whether assets in this jurisdiction should be applied in discharge of liabilities which are not preferential as a matter of English domestic law but which would be accorded priority under Italian law." Interestingly the administrator in the case is a Professor Fantozzi. Unfortunately I have not been able to locate the institution where he holds a chair. The judge provides an exhaustive exposition of the regulation, the rule in ex parte James, and other issues.
Picture Credit: http://www.maitlandchambers.com/Files/Member/Photo/Guy_Newey-39584.jpg