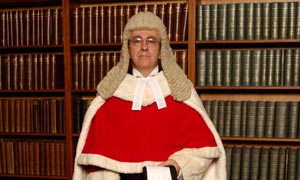 Mr Justice Floyd (pictured) has handed down his decision in White v Davenham Trust Ltd [2010] EWHC 2748 (Ch) (01 November 2010). The case concerns statutory demands and the exercise of discretion pursuant to 6.5(4)(d) of the Insolvency Rules 1986. This rule provides that a statutory demand may be set aside if the court is satisfied, on grounds other than those set out in sub-paragraphs (a) to (c), that the demand "ought to be set aside". Mr Justice Floyd's judgment contains a number of interesting elements, not least his thorough exposition of relevant case law. Ultimately the learned judge reverses Mr Deputy Registrar Schaffer holding that the statutory demand should not have been set aside.
Insolvency Rule 6.5(4) of the Insolvency Rules 1986 provides that:
"the court may grant the application if-
(a) the debtor appears to have a counterclaim, set-off or cross demand which equals or exceeds the amount of the debt or debts specified in the statutory demand; or
(b) the debt is disputed on grounds which appear to the court to be substantial;
(c) it appears that the creditor holds some security in respect of the debt claimed by the demand, and either rule 6.1(5) is not complied with in respect of it, or the court is satisfied that the value of the security equals or exceeds the full amount of the debt;
(d) the court is satisfied, on other grounds, that the demand ought to be set aside."
The learned judge then examines a number of pertinent cases to the rule. He notes:
"In contrast to grounds (a) to (c), which identify specific facts which must be established, ground (d) gives the court a broad residual discretion. In Budge v A.F. Budge (Contractors) Ltd (In receivership and liquidation) [1997] BPIR 366 Peter Gibson LJ put the test under paragraph (d) in this way:
"The real question …. is whether the [the applicant] can show a substantial reason, comparable to the sort of reason one sees in paras (a), (b) and (c) of r6.5(4), why the demand ought to be set aside. "
In Remblance v Octagon Assets Limited [2009] EWCA Civ 581; [2010] 1 BCLC 10, the majority of the Court of Appeal set aside, under paragraph (d), a statutory demand against a guarantor in a case where it was common ground that the principal debtor had an arguable counterclaim or cross-claim which equalled or exceeded the amount claimed against it. Dyson LJ said this at [33]
"The discretion to set aside a statutory demand under r 6.5(4)(d) is a residual discretion which will normally be exercised in "circumstances which would make it unjust for the statutory demand to give rise to [bankruptcy] consequences in the particular case. The court's intervention is called for to prevent that injustice": see per Nicholls LJ in Re a Debtor (No 1 of 1987, Lancaster), ex p the debtor v Royal Bank of Scotland plc. [1989] 2 All ER 46 at 50, [1989] 1 WLR 271 at 276. Nicholls LJ went on to say that this approach to sub-para (d) is in line with the particular grounds specified in sub-paras (a)-(c) of r 6.5(4). As he said (with reference to sub-para (a)), it would normally be unjust that a person should be regarded as unable to pay a debt if he has a counterclaim, set-off or cross-demand which equals or exceeds the amount of the debt."
That passage forms an important part of the appeal in the present case, as it is said that the combination of arguments under paragraphs (a) or (b) of the sub-rule in combination with the existence of security under the Gowan agreement would have given St George's an answer to a statutory demand. "In line" with that, it would be unjust to enforce the demand against Mr White. I have no doubt that in some cases that may be the position; but in each case the question is whether the circumstances make it unjust to do so."
At first instance the Deputy Registrar observed that, "Injustice can take many forms and the Bankruptcy Court should not be restricted as to how it should use its discretion when determining whether a Statutory Demand should or should not be set aside." On this occasion Mr Justice Lloyd held however that, "the evidence does not persuade me that this is a case where the court ought to set aside the demand under rule 6.5(4)(d)."
Picture Credit: http://static.guim.co.uk/sys-images/Sport/Pix/pictures/2010/10/12/1286899317619/Swearing-In-of-Mr-Justice-004.jpg