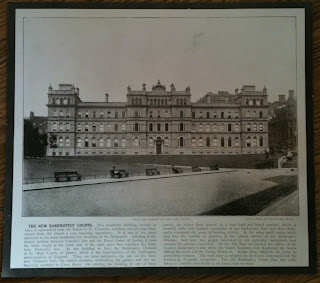 We have recently discussed the Bankruptcy Court's impending move to the Rolls Building and the attendant jurisdictional change that the move has necessitated. There is nothing new in this as the following extract shows:


"The New Bankruptcy Courts [pictured]. - This handsome building, erected in 1892, is approached from the Strand by St. Clement's Gardens, and presents when viewed from the church a very imposing appearance. It is one of the latest additions to the many handsome law structures of the Metropolis. Standing  in the district midway between Lincoln's Inn and the Royal Courts of Justice, it runs the whole length of the north side of the open space that separates the latter from Clement's Inn.
In this building we have the Bankruptcy Division of the High Courts of Justice, which is the head-quarters of the bankruptcy administration of England. There are three entrances - the one on the west, near Clement's Inn;  the central doorway, overlooking the garden, and the unimposing entrance in Carey Street. On entering the building by one of these portals, the visitor finds himself in a very long and broad corridor, which is crowded daily with learned expounders of our bankruptcy laws and their clerks, and is constantly the scene of bustling activity.
In the many small courts which lead into the corridor in question sit the various officials of the Bankruptcy Division;  and here, too, people interested in any particular bankruptcy may examine the petition concerned. On the first floor are located the offices of the London Bankruptcy Court, where the Senior Registrar, four Registrars, the Senior Official Receiver, and the Taxing Master sit. Before these affidavits are sworn by petitioning creditors. The third story is occupied by the Court concerned with the winding-up of public companies. The old Bankruptcy Court that was established in Lincoln's Inn Fields is, of course, now no more."