The Rolls Building and Bankruptcy - a move of location and hiving off some work to the Central London County Court - Wasting the Registrars' knowledge? 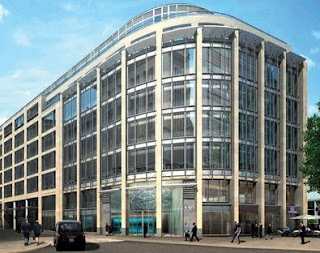 The Rolls Building (110 Fetter Lane - pictured) the new venue for, "dealing with high value, complex, business related matters" is soon to be the new home of, inter alia, the Bankruptcy Registrars. Leaving issues such as inadequate toilet facilities and a lack of cells for litigants who are in contempt of court (or worse) to one side, we must concentrate on another major change which has largely bypassed commentators.
One major consequence (or major side effect) of the move is a little concerning in terms of the bankruptcy specialism that will be diluted as a result of what is occurring to the bankruptcy jurisdiction of the High Court at the same time as the relocation, namely, the hiving off of some of the Bankruptcy Registrars' work to the County Court jurisdiction and in particular the Central London County Court. In a September 2008 statement by Mr David Thompson, RCJ Director, it was noted that:
"In the course of the review it was further agreed, in the light of the report of a working group commissioned by the Chancellor and chaired by Mr Justice David Richards, that low value personal insolvency work should be re-designated to the County Court jurisdiction. As a result there will be provision for 4 Bankruptcy Registrars in the Rolls Building dealing with Company Insolvency and Personal Insolvency requiring to be dealt with in the High Court.  Implementation of the recommendations of the working party will take place in liaison with all interested stakeholders."
The office of the Bankruptcy Registrars has existed for well over 150 years. This alone is of course not a reason to maintain their current jurisdiction. It should however give pause for thought for the long held experience and expertise that the office, and it's holders, have built up over time. For a substantial element of their jurisdiction to be removed and sent to a court which lacks specialism in this highly technical chancery subject is rather problematic. What is the rationale for this rejigging in the Registrars' responsibility? If it is efficiency savings, it could be argued that these are being bought at the price of the proper exercise of justice. County Court judges typically have have very little expertise in this area - Bankruptcy Registrars have unrivaled experience. Why are we wasting this valuable asset? After the reallocation the Bankruptcy Registrars will be left with a diet of company work, most of it second and third rate, with very little bankruptcy to do.
From some sources it seems that the reallocation  of low value bankruptcy work could have been caused by a lack of space in the new building! In a recent statement on Rolls Building usage the Lord Chief Justice, the Lord Judge observed:
"...Together with the agreed reduction in the number of Bankruptcy Registrars to be accommodated in the Rolls Building, through the proposed redesignation of personal bankruptcy work to the County Court jurisdiction, this will overcome the accommodation pressures identified at the outset of the review and will enable the project to proceed to the detailed planning stages."
As has been noted on this blog before some heated debate occurred in the House of Lords on the bankruptcy jurisdiction on 3 July 1851. The Lord Brougham was discussing "a Bill abolishing patronage producing great emolument, and among other offices it abolished the office of Chief Registrar of the Court of Bankruptcy, which produced to its holder 1,200l. a year, and transferred the duties of it to the Lord Chancellor's Chief Secretary." The Lord Chancellor responded that, "he certainly now found that the Chief Registrar was an essential officer to give validity to most important proceedings in bankruptcy, and to establish titles acquired under bankruptcy." and, "he had not done more towards carrying into effect the recommendations contained in certain reports for the abolition of certain offices, as those of Secretary of Bankrupts, and Chaffwax and Sealer."
We are not witnessing the abolition of the Chief Bankruptcy Registrar, but we are about to see a serious change to the bankruptcy jurisdiction, which it could be argued, amounts to a complete absurdity. What might the Lord Brougham say? Sir Kenneth Cork would certainly have taken a dim view. In the seminal Cork report (Cmnd.8558, at paragraph 1000) it is observed that, "all insolvency matters relating to companies and individuals must be heard in the same court...the judicial officers appointed to hear insolvency matters should sit frequently enough to give consistency to their decisions and to enable them to acquire a detailed knowledge of the specialist subject..." With the current Bankruptcy Court arrangements Cork is well answered. The new re-allocation arrangements will surely dimish the esteem within which the bankruptcy jurisdiction is currently held.
Picture Credit: http://www.propertyweek.com/pictures/458xAny/6/5/8/1663658_110_fetterlane_1_CMYK.jpg