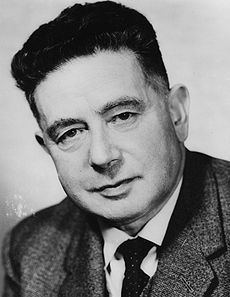 Creditors often get a bit of a bashing. Indeed, it is a truism to say that some of my own scholarship has been accused of being debtor friendly - mainly by creditors and their representatives! Whilst I refute the charge I will nevertheless attempt to offer some creditor friendly views in this post by reference to the monumental figure of Professor Sir Otto Kahn-Freund QC FBA (1900-1979 - pictured). In his seminal Modern Law Review (MLR) article 'Some Reflections on Company Law Reform' ((1943-1944) 7 MLR 54-66) the learned professor presented a compelling series of arguments for creditor protection. We will explore those arguments here. First, we must examine some biographical material regarding the learned occupant of the Sir Ernest Cassel Chair of Commercial Law, the long standing hotbed of corporate law scholarship at the LSE. Incumbents of that chair have included: Professor Jim Gower, and Professor Paul Davies QC FBA, Professor Lord Wedderburn QC FBA, Professor Sir Ross Cranston QC FBA. We must leave those giants and their contribution to insolvency for another time. We must now turn to Sir Otto. As his ODNB biographer notes he was born:
"in Frankfurt am Main on 17 November 1900, the only child of Richard Kahn-Freund, a merchant, and his wife, Carrie Freund...
Kahn-Freund studied principally at the University of Frankfurt, where he was powerfully influenced by Hugo Sinzheimer, who first interested him in labour law. In 1929 he entered the judiciary as a judge of the Berlin labour court. He married in 1931 Elisabeth, daughter of Friedrich Klaiss, mechanic. She shared his political convictions and his interests. They had an adopted daughter.
When the Nazis came to power Kahn-Freund was already known for a small book criticizing the ideology behind the decisions of the supreme labour court... The result was his own dismissal and departure to England. There he became a student at the London School of Economics, which for the next thirty years was the focus of his life and which was ideally suited to one of his temperament and views. Appointed an assistant lecturer in 1936, he became a professor in 1951. He was also called to the bar by the Middle Temple in 1936 and was for a time in chambers with Patrick (later Lord) Devlin. He was naturalized in 1940. Kahn-Freund was an outstandingly exciting lecturer, with a command of English which any native speaker might envy. The lecture was indeed his favourite medium and his most brilliant work originated in that form."
Let us now turn to one of those brilliant works.
The MLR article and Creditor Arguments
In his article Sir Otto focuses on the relationships that exist between a company and various stakeholders. He identifies these as the shareholders, the community and creditors. The remainder of the article dwells on the position of the latter. As Sir Otto notes his article, "tries to analyse a number of topical questions of company law from the point of view of the outside creditor." In particular Sir Otto mulls on the abuse of the corporate entity and the 'calamitous' decision in Salomon v. Salomon [1897] AC 97, which solidified the 1862 Companies Act intention to extend limited liability to small closely held companies. Sir Otto laments that the courts had at that time failed to, "give protection to the business creditors which should be the corollary of the privilege of limited liability." He goes on to observe that, "the metaphysical separation between a man in his individual capacity and his capacity as a one-man company can be used to defraud his creditors who are exposed to grave injury owing to the timidity of the Courts and of the Companies Act." After setting out his stall Sir Otto then suggest some solutions to what he views as the intractable Salomon problem. We will review these in Part 2, which will appear on Monday - have a good weekend!
Picture Credit: http://farm3.static.flickr.com/2663/3925714753_0ba8e90a41.jpg