Pre-nuptial agreements and bankruptcy - what is the effect of their validity on creditor interests? 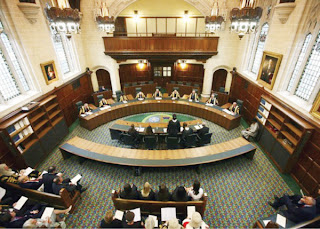 The UK Supreme Court (UKSC - pictured) has handed down its long anticipated judgment in Radmacher (formerly Granatino) (Respondent) v. Granatino (Appellant) [2010] UKSC 42. The case concerns the validity of pre-nuptial marriage agreements in English law. As the UKSC summary notes the UKSC found, inter alia, that "the Court of Appeal was correct to conclude that there were no factors which rendered it unfair to hold the husband to the agreement." Pre-nuptial agreements can therefore take effect in English law.
The case raises an important issue in relation to the bankruptcy jurisdiction, namely, what should the law of insolvency do about pre-nuptial or post-nuptial agreements between husband and wife, the effect of which are to put assets beyond the reach of creditors? Or put another way, if a debtor husband has made a pre or post-nuptial agreement with his wife which has the effect of causing their 'joint assets' to revert to the non-debtor wife so as to put them beyond the reach of his creditors, how should the law of insolvency respond?


Bankruptcy is mentioned only once in the Radmacher case and that is in the dissenting judgment of the Lady Hale, but her comments are not in this anti-creditor context. At paragraph 175 the learned Baroness (and sometime law professor in the University of Manchester) observes:
"A couple may think that their futures are all mapped out ahead of them when they get married but many things may happen to push them off course – misfortunes such as redundancy, bankruptcy, illness, disability, obligations to other family members and especially to children, but also unexpected opportunities and unexplored avenues."


So how should the law of insolvency respond to pre-nuptial and post-nuptial agreements? (hereafter referred to collectively as nuptial agreements). Some useful guidance may first be found in statutory provisions that regulate transactions in fraud of creditors, transactions at an undervalue, preferences, and associated areas. The now repealed section 42 of the Bankruptcy Act 1914 must be our first port of call. The section noted, inter alia, that:


The modern provision is section 339 of the Insolvency Act 1986 (Transactions at an undervalue) which notes:


Section 423 of the Insolvency Act 1986 (Transactions defrauding creditors) is also of note. It states:


These sections are slightly off point, but they do indicate that there is a legislative willingness to interfere with contracts made between debtors and third parties in the context of insolvency and marriage. A pre-nuptial agreement may therefore be critiqued in a similar manner. There are two points to make at this stage. First, does a transaction in in consideration of marriage in some way relate to nuptial agreements, and if so, can a nuptial agreement be defeated by the provisions cited above?


Is there any case law guidance that is useful on this area? There are a number of bankruptcy cases that contain discussion of nuptial agreements, but not specifically on the transaction in fraud of creditors context as outlined above. These cases are:


Beach v Beach [1995] 2 FLR 160
As Mrs. Justice Eleanor King has observed ([2008] EWHC 2038 (Fam)) "Beach concerned a husband who went bankrupt after the agreement was made with his wife; this resulted in the family farm, the only significant asset, being sold by the trustee in bankruptcy for a fraction of the sum which it had been anticipated by both parties would be available for distribution."


Brittain v Courtway Estates Holdings SA [2008] EWHC 1791 (ch); [2008] BPIR 1229
This bankruptcy case was decided on a point concerning beneficial interest. However, My Justice Evans-Lombe found on the facts that "The Bankrupt was married to Yasmin Senft ( “YR”) in 1993 with whom he entered into a prenuptial agreement of 15 July 1993 in which she is described as a “student” then 23 years old...."

Geveran Trading Co Ltd v Skjevesland [2003] B.C.C. 209
Where before Mr Registrar Jaques evidence was adduced in a bankruptcy hearing on COMI that, "Our prenuptial agreement, incidentally, is registered in Zurich, not anywhere else in the world, not in the UK not Norway. It is registered in Switzerland. My wife's family live there all their life. My wife is brought up there. My children are brought up there. All of us speak French fluently."

Re Eichholz (No.1) [1959] Ch. 708; [1959] 2 W.L.R. 200; [1959] 1 All E.R. 166
In this case a trustee was appointed to administer an insolvent estate in bankruptcy. Under the Bankruptcy Act 1914 s.130 the trustee was entitled to bring an action under the Law of Property Act 1925 s.172 to recover property conveyed with intent to defraud creditors. The trustee in bankruptcy sought a declaration that a dwelling-house which had been conveyed by the deceased to his wife by a deed dated March 15, 1955, was conveyed with intent to defraud the deceased's creditors and was void under the Law of Property Act 1925 s.172 and should be set aside.

The provisions and case law cited above provide a brief flavour of some of the important issues that are raised by the intersection of insolvency law and family law. The search for the answer continues!