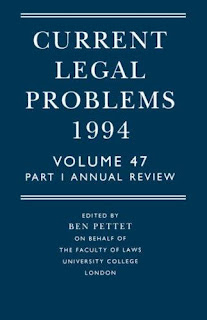 It has been announced that Dr Sandra Frisby, Baker & McKenzie Associate Professor in Company and Commercial Law at Nottingham University, is to deliver one of the prestigious UCL Current Legal Problems lectures. Her paper abstract looks extremely interesting. Her title is: "Insolvency Law and Insolvency Practice: Principles and Pragmatism Diverge?" The session will be of interest to academics and practitioners alike. The lecture takes place on Thursday 2 December 2010. Here is the paper abstract:
"The past few years have seen an increasing interest in insolvency law and insolvency practice. The reforms brought about by the Enterprise Act 2002 have been discussed and evaluated at length and there have been renewed petitions for a revitalisation of the ‘rescue ideology’ which have now focused on the Company Voluntary Arrangement, the hitherto poor relation of the insolvency family of procedures. The rise and rise of the ‘pre-pack’ administration has seen arguably the most heated and public debate ever to materialise in relation to insolvency law.
This paper considers this debate and these developments and questions how far they mark an emerging discord between the basic principles upon which UK insolvency law is based and the practical responses of insolvency professionals to legislative initiatives and the real world exigencies of corporate insolvency that they encounter on a day to day basis. It does so by reference to, inter alia, the landmark account of the aims of a modern insolvency law found in the Cork Report of 1982, the championship, almost twenty years later, of the policy of corporate rescue and, finally, the author’s own empirical research into such matters as insolvency outcomes, pre-pack administrations and the company voluntary arrangement procedure.
The analysis includes an examination of the corporate rescue/business rescue dichotomy and the appropriateness or otherwise of recourse to fiduciary standards in relation to insolvency office holders. Its overall focus is, firstly, how far law and practice appear increasingly divorced in this particular context and, perhaps more importantly, whether any apparent retreat from pristine doctrine is justified by optimised outcomes in insolvency."
Picture Credit: http://covers.openlibrary.org/b/id/2331154-L.jpg