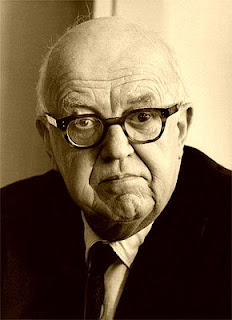 Readers of the blog who are familiar with CP Snow's Strangers and Brothers novel series will not need me to remind them of how excellent the books are. In my view the Lord Snow PhD KBE CBE (1905–1980 - pictured) evokes the trials and tribulations of academia almost perfectly. This ability perhaps stems from his long career as variously: an academic, scientist and administrator. He was we are told, "everyone's idea of a wizard scientist" his "owlish, spectacled face, heavy jowls, bald dome, and ponderous frame, often accoutered in a shapeless suit, and his inevitable cigarette in hand, were recognizable worldwide." The purpose of this blog entry is to recognise the Lord Snow's contribution to bankruptcy in his Strangers and Brothers novel series.


The series contains eleven novels. These range over British life and politics from just before the Great war  until the 1970s. The Masters, for example, contains a brilliant exposition of the machiavellian world of college politics and intrigue. The twists and turns discussed in the book could easily be seen in any University today. There is a Professor Gay in every College - "I congratulate you!" One of my colleagues thinks I am somewhat of an Arthur Brown type character. If only I had Brown's watercolour and wine collection! The Masters has in my view rightly been called, "the best academic novel in English."


The Light and the Dark is also marvelous. The book was reviewed in the following terms by Sir John Betjeman:  "A novel written with the intuition of a woman and the grasp of broad essentials generally reserved for men . . . As full of life as life itself." The theme is dark (i.e. suicide) but the work is a must read.
The Strangers and Brothers novel that will be of most interest to readers of the blog is the Lord Snow's 1940 novel, Time of Hope.  The book charts the early life of the narrator of the entire Strangers and Brothers series, namely, Mr Lewis Eliot. Lewis eventually becomes a barrister and then a Cambridge law don. Before he becomes a college fellow though he has a rather tumultuous start in life, in the main caused by his father's bankruptcy.
We are given the details of Lewis' father's bankruptcy in the early chapters in Time of Hope. Terms such as 'receiver' (page 24), 'petition' (e.g. pages 22, 24 and 26), and 'bankruptcy' (e.g. page 26) are frequently deployed. I have included here what Lewis' Aunt Milly thinks of bankruptcy and wider familial obligation:
"Your father has gone bankrupt...When you grow up...you ought to feel obliged to pay every penny he owes. You ought to make a resolution now. You oughn't to rest until you've got him discharged and you family can be honest and above board again. Your father will never be able to do it stop. He'll have his work cut out to earn your bread and butter." (at page 26).


Aunt Milly (or the Lord Snow!) may or may not have been aware of the discharge provisions in the Bankruptcy Acts of 1883 and 1914. She does however expound a view of bankruptcy, and in particular credit obligation, which was perhaps common then (1914/1940) and is perhaps still now in some circles (2010)!


Some commentators have opined that the Strangers and Brothers series is largely autobiographical and that a number of characters closely mirror the Lord Snow's own character and career. Lord Snow was, for example, elected a fellow of Christ's College Cambridge in 1930 following completion of his PhD dissertation, ‘The infra-red spectra of simple diatomic molecules.’ Lord Snow's father, like Lewis Eliot's, was a choir master and a clerk in a shoe factory. In a Time of Hope the insolvency arises because of over-indebtedness associated with a shoe factory. The facts are actually not unlike those in the famous Salomon v. Salomon [1987] AC 22, where Aron Salomon was a leather goods merchant who made, inter alia, boots for the British Army. One final point can be made on this autobiographical theme - the character of Roy Calvert has a well earned reputation amongst his fellows as being somewhat of a ladies man. On this theme the Lord Snow's ODNB biographer notes, "his [Lord Snow's] affairs with women became grist for his novels."


I do not currently know if, like his fellow author John Le-Carre, Lord Snow's father was a bankrupt. A copy of Time of Hope to anyone who finds the answer!
Picture Credit:http://3.bp.blogspot.com/_rW6QtV-zMlE/TEQaJV3zJqI/AAAAAAAAAQI/71MugRN5yCI/s1600/snow_two_cultures.jpg