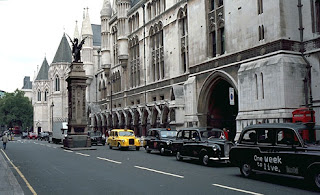 Mrs Justice Proudman has handed down her judgment in Anfield (UK) Ltd v Bank of Scotland Plc & Ors [2010] EWHC 2374 (Ch) (24 September 2010) whilst sitting in the Royal Courts of Justice (pictured). The case concerns the remedy of subrogation as it affects the priority of charges. The charges on a property in Stepney Green in London were created following loans to Mr Siddiqui. He was a bankrupt and the owner of the property. As Mrs Justice Proudman notes in the portion of her judgment that deals with the law; "A lender who has made advances which have been used to discharge a secured debt owed to another lender may be entitled to step into the shoes of the other lender as far as the security is concerned, thereby gaining priority over intermediate lenders also holding security over the same property.
It is plain from the authorities cited and authoritatively analysed in Appleyard (and particularly the decision of the House of Lords in Banque Financière de la Cité v. Parc (Battersea) Limited [1999] 1 AC 221) that the principle underlying such subrogation is equitable in origin and is now recognised as primarily aimed at preventing unjust enrichment." In finding that the appeal failed Mrs Justice Proudman observed: "In my judgment Her Honour Judge Marshall QC came to the right decision, that the Bank is entitled to be subrogated to the Halifax Charge."
Picture Credit: http://media-2.web.britannica.com/eb-media/28/18528-004-9C2C3B23.jpg