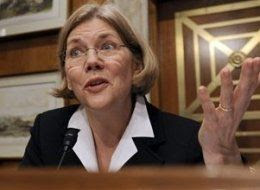 President Barak Obama, who was given his first academic post by bankruptcy scholar Professor Douglas Baird, has appointed another bankruptcy scholar to set up the Consumer Financial Protection Bureau (CFPB). Professor Elizabeth Warren (pictured) of Harvard Law School is to set up the new organisation as a special advisor. The BBC are reporting that:
"By becoming an adviser rather than head of the agency, Mrs Warren avoids Senate hearings which may have stopped her nomination.
She has angered some lawmakers because of her strong criticism of banks.
A Harvard law professor, she made her acceptance statement on the White House Blog, saying "the time for hiding tricks and traps in the fine print is over. If the CFPB can succeed at levelling the playing field, we can go a long way toward repairing a gaping hole in the budgets of millions of families".
Mr Obama said that as the agency was Mrs Warren's idea, it made sense that she should be "the architect" working with Treasury Secretary Timothy Geithner to get it up and running..."
Picture Credit: http://images.huffingtonpost.com/gen/77803/thumbs/s-WARREN-large.jpg