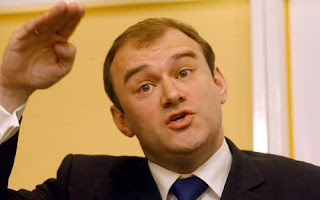 Accountancy Age are reporting that the Insolvency Service (IS) are to drop their corporate insolvency reforms. They actually note the driving force as the Tories, but it is of course the IS who would take through any policy changes that the incumbent government suggest. It could be argued that it is in fact the Liberal Democrats (as part of the coalition) as Mr Ed Davey MP is the minister in charge of the IS (he is pictured to the right speculating on how high the cost of the reform process would be - "This high chaps - we must abandon this policy change"). The article notes:
"The Conservatives have ‘quietly dropped’ their plans for business insolvency reform after opposition from business leaders, according to the FT.
Prime minister David Cameron had originally called for the introduction of US-style Chapter 11 bankruptcy protection rules, saying the UK’s insolvency process did not offer enough protection to distressed companies, a move that was met with little enthusiasm in the corporate world.
The newspaper says this will put pressure on the coalition to protect struggling firms from banks hoping to use an economic recovery to sell their assets and call in loans.
With the plans seemingly abandoned, Conservative MP George Eustace has tabled a private members’ bill aiming to “reduce litigation and encourage banks to work with their customers to find solutions” and, he says, bring in “much needed responsibility in the banking sector.”
A spokesperson from the government’s business department told the paper that it kept “insolvency policies under review, making sure they are effective and relevant”.
About a year ago I wrote a chapter for an Ashgate collection that argued why their plans should be dropped. See here. It could be argued, inter alia, that this drop in policy is prudent in these lean times.
Picture Credit: http://papers.ssrn.com/sol3/papers.cfm?abstract_id=1328478