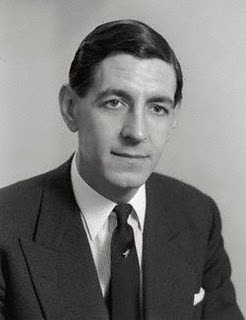 Bankrupt peers and MPs have been discussed on this blog before, particularly in relation to the preclusion from sitting in Parliament which the singular legal state automatically gives rise to. One parliamentarian's name has been missed until now, and that is Sir Edward Dillon Lott du Cann KBE (1924 - pictured).
Sir Edward was the Conservative MP for Taunton from 1956 until 1987. He held ministerial office as Economic Secretary to the Treasury and Minister of State at the Board of Trade in 1963-64. He became chairman of the party in 1964. He was chairman of the influential 1922 committee for twelve years from 1972. As the Independent notes, Sir Edward had somewhat of a controversial business career:
"The Department of Trade and Industry's report into the affairs of Keyser Ullman, a failed merchant bank, found him to have been 'incompetent' while he was the bank's chairman between 1970 and 1975. In 1973, the bank lent £17m to a 28-year- old entrepreneur, Christopher Selmes, secured on a valueless guarantee. Mr Selmes later fled the country, leaving debts of more than pounds 20m.
A Serious Fraud Office inquiry followed the collapse of a mortgage broker, Homes Assured, in September 1989. Sir Edward had resigned as its deputy chairman only a few days before it collapsed owing £10m to 1,500 creditors. The Department of Trade and Industry has started proceedings, contested by Sir Edward, to have him disqualified from holding company directorships."
In 2010 Sir Edward is reported as being the chairman of the failed payment clearance provider, E-Clear. The firm collapsed into administration.
Back to Sir Edward's own finances. Sir Edward was adjudicated bankrupt on 12 March 1993 following a petition by Denton Hall Burgin & Warren for unpaid solicitors' bills totaling some £250,000. He was estimated to owe more than £1.2 million according to his trustees in bankruptcy, Mr Christopher Morris, of Touche Ross, and Mr Christopher Hughes, of Coopers & Lybrand. Sir Edward attempted to have his bankruptcy order annulled in the Taunton County Court, Somerset. The presiding district judge agreed to allow an IVA to be put to creditors.
Subsequently, Sir Edward attempted to re-purchase his 300 acre Somerset estate, Tremlett Hall Farm, which surrounds the hamlet of Greenham on the Somerset-Devon border. The farm abuts his 15th century manor house, Cothay Manor. A local villager once observed of Sir Edward, "He is respected for his ability to have no respect for money whatsoever." He is himself reported as saying,  'I am a great believer in borrowing money ...The trouble is that most people let money be their master when it should be their servant. We are extravagant, I suppose. We could go to Joe Lyons, but we prefer the Mirabelle.'
Picture Credit: http://3.bp.blogspot.com/_NE-72ZXux-g/SzhmZB5A-hI/AAAAAAAAMM4/xbL8UMTqyPE/s320/Du+Cann.jpg