More Disorder in the Bankruptcy Courts - arson and bankruptcy 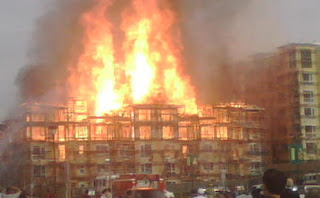 I am grateful to the anonymous commentator on the last post who has drawn my attention to the following story, published in the Cambridge News in July 2010. The story is entitled, "Suspect car blown up at station after arson in court" and is written by Chris Havergal. It is noted that:
"A courtroom was set alight and a controlled explosion was carried out on a suspect car in four hours of chaos across Cambridge.
The city’s station, where the vehicle had been parked, was evacuated as Army bomb squad experts made the silver Vauxhall Astra involved safe.
Police said a 62-year-old from Waterbeach had been arrested on suspicion of arson and he is still being questioned by officers today.
The drama started shortly before noon in hearing room six of Cambridge County Court on East Road, where bankruptcy cases were being heard.
A man, thought to be a party in a case, took out a flammable liquid, believed to be petrol, and started splashing it on paperwork and furniture before setting them on fire.
The arsonist was confronted by security guard Matthew Clarke, who tackled him and held him for long enough for everyone else in the room to escape.
At the scene, court manager Alex Pether told the News: “He put his life on the line. We’re very grateful.”
...
Crews used a turntable ladder to break a window on an upper floor to help ventilate the building, and the courtroom involved was thought to be seriously damaged by smoke.”
The story makes the RCJ's challenger episode sound positively pedestrian! An experienced IP once told me that they knew of a tale involving an Official Receiver in Norfolk who was (non-fatally) shot by a debtor with a shotgun. I cannot find any newspaper evidence to corroborate - does anyone know of this episode?
Picture Credit: http://www.nicksimonsen.com/wp-content/uploads/2007/09/building-fire.jpg

Stephen Hunt, Partner at Griffins Insolvency Litigation Forensics said…
I heard that the OR who was shot was in or around Liverpool and it was in the 1980s at the latest. It could well be apocryphal.
27 August 2010 at 13:44