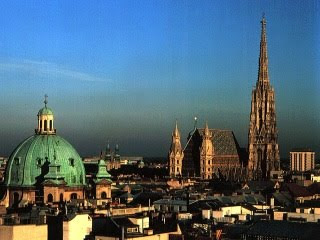 Sussex Law School's Dr Paul Omar has announced the details of the forthcoming INSOL Europe Academic Forum Conference, which is due to take place in Vienna (pictured) between 13 and 14 October 2010. Dr Omar has noted:
"The Academic Forum of INSOL Europe is an association of academic lawyers researching and teaching in insolvency law. The organisation was founded in 2004 and meets annually in conjunction with the main conference of the parent organisation. Previous meetings have taken place in Prague (2004), Amsterdam (2005), Monaco (2007), Leiden and Barcelona (2008), Sussex and Stockholm (2009) as well as Leiden (2010).
The Academic Forum’s next annual meeting is scheduled to take place in association with the INSOL Europe conference at the Intercontinental Hotel in Vienna. The meeting, to be held over two days (13-14 October 2010) will feature research papers and presentations given by members of the academic community in Europe and elsewhere.
As part of the proceedings, there will also be an Academic Reception and Dinner for delegates. The Academic Forum is pleased to announce that a lecture will also be given by an eminent insolvency scholar, for which sponsorship has been provided by Edwin Coe LLP.
A near-final conference schedule is available below.
Details of the academic conference have been included in the registration brochure for the main INSOL Europe conference (at pp. 12-13), which is now available at:
<http://www.insol-europe.org/download/file/2445>.
On-line registration for the academic conference is also possible at:
Further information about the academic conference and the work of the Academic Forum can also be obtained via the Academic Forum website at: <http://www.insol-europe.org/academic/> or from the Secretary via e-mail at: <paulo@sussex.ac.uk>."
Picture Credit: http://www.fas.org/irp/imint/docs/rst/Sect6/vienna_1.jpg