More Problems at Pompey - "we owe you X, sorry, in fact you owe us X" 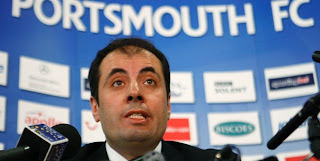 Pompey's recent FA cup final defeat at the hands of Chelsea may be tempered by the news that they are in fact £4 million better off that previously thought. This news comes to us from a fascinating piece in the Guardian entitled, "Good News for Prortsmouth...Guardian finds missing £4 million." The article highlights how a KPMG report was misread by the current administrator, Mr. Andrew Andronikou (pictured) of messrs UHY Hacker Young. The public nature of this rather large mistake, if it is in fact correct, is rather embarassing for the insolvency practitioner (IP). It cannot fill the creditors with much confidence. As the Guardian point out this is not the first instance of ineptitude. They note, "Andronikou's past record as an insolvency practitioner has not been without controversy. In December 2008 he was found by the high court to have "failed to meet the standard to be expected of a reasonably competent insolvency practitioner" during an insolvency process." For my discussion of Mr Andronikou's contact with the courts see here.
Has the appropriate standard expected of the IP been missed again? Or, in Andronikou's defence, is this something that might be expected in the hurly burly environment of a high pressurised, highly public £138 million administration?
Picture Credit: http://www.mirrorfootball.co.uk/news/article336775.ece/ALTERNATES/gallery-large/Andrew+Andronikou.jpeg