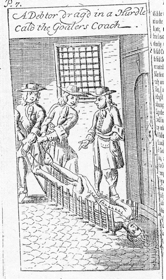 The story of the seventeenth century[1] debtors’ experience in Lincoln[2] debtors Gaols (Castle Gaol, City and County Gaol) is possible to recount using Pitt's work. Lincoln Castle was first used as a debtors’ prison in about 1790.[3] In the late seventeenth century, debtors were confined in Lincoln Castle and in 1690 were some thirty or forty in number[4]. One imprisoned debtor, William Follet, obtained some six pounds two shillings capital, with which he planned to purchase leather as stock to help maintain himself whilst confined. It is alleged that the six pounds two shillings was stolen from him by order of the “Inhuman goaler,(sic) William Smith”[5]. When Follet complained he was dragged in his coach by his heels[6], ‘suffering his head to beat on the hard stones…by which ill usage the said Follet is become not altogether so well in his intellects as formerly.’[7] It is further alleged that William Smith encouraged felons to mistreat debtors, for example, causing one Robert Slinger (a felon) to nearly knock out the eye of a debtor (Stephen Turrington). When Turrington sought restitution from William Smith he was, ‘entertain’d with nothing but Scoffs and Laughter’[8].

[2] On the history of Lincoln generally see: Anonymous. Memoirs illustrative of the History and Antiquities of the County and City of Lincoln, communicated to the annual meeting of the Royal Archaeological Institute of Great Britain and Ireland, held at Lincoln, July, 1848 with a general report of the proceedings of the meeting and a catalogue of the museum formed on that occasion. London, MDCCCL.

[3] Neild’s exposition of Lincoln Castle gaol (page 328) relates to the gaol built in about 1790. See: Neild, J, Account of Persons confined for Debt, in the various prisons of England and Wales, ... with their provisionary allowance during confinement; as reported to the Society for the discharge and relief of small Debtors. London, 1800.

[4] Pitt, M. The Crye of the Oppressed being a true and tragical account of the unparrallel’d Sufferings of Multitudes of poor Imprisoned Debtors, in most of the Goa’s in England, under the Tyranny of the Goalers, and other Oppressors, lately discovered upon the occasion of this present Act of Grace For the Relief of poor Prisoners fr Debt, or Damages; some of them being not only Iron’d and lodg’d with Hogs, Felons , and Condemn’d Persons, but have had their bones broken; others poisoned and starved to death; others denied the common blessings of nature, as Water to drink, or straw to lodge on; others their Wives and Daughters attempted to by ravish’d; with other Barborous cruelties, not to be parallel’d in any History or Nation: All which is made out by undeniable evidence. Together with the case of the publisher. London, Printed for Moses Pitt and sold by Booksellers of London and Westminster, 1691, at page 6.

[6] See the picture to the right of this blog entry, and the depiction of William Follet’s rough treatment at the hands of the gaoler and his ‘ruffians’ in Lincoln Castle debtors prison.

This history seems somewhat confused. Lincoln Castle is the gaol of the county at large. The City and County of the City had its own gaol.

Lincoln Castle has been the shire hall and county gaol of the county at large since at the latest circa 1100 when the constableship of the Castle and the shrievalty were in the same hands and as such will have housed debtors as long as the writ of capias existed. (For the early history of the Castle see Sir Francis Hill: Medieval Lincoln CUP 1948 Chap V).

Howard visiting in 1774 and 1776 described the debtors’ rooms “as having floors of tarras (or plaster) which could not be kept clean and the windows were closed glazed. The free ward for debtors was a room at the end of the building paved with small stones which was a thoroughfare to sundry places. A trap door in the pavement led down ten steps to two vaulted dungeons, one the pit and the other the condemned sell. There was no chapel, service being performed in the shire hall and no infirmary. (Sir Francis Hill: Georgian Lincoln CUP 1966 p 20).

This building was replaced by a building built 1786-7 to designs by William Lumby after an earlier design by Carr of York was abandoned (ibid p 21 and Medieval Lincoln p 100). The crown wing was rebuilt 1844-7 (Olney: Rural Society and County Government in Nineteenth Century Lincolnshire: History of Lincolnshire Committee 1979 p 118-9).

The prison went out of use following the construction of a prison on a different site in 1872. However the county magistrates continued to sit in a part of the building containing the prison until circa 1990 and the holding cells for the court continued in use until then. The remainder of the building was used by Lincolnshire Archives until the early 1990s with the cells acting as repositories. The building is now a tourist attraction and exhibition space for Magna Carta. Although the County Court did not sit regularly at the Castle, until the coming into force of the Insolvency Act, the Registrar used to take public examinations in bankruptcy in this courthouse. It is now a teashop. The separate assize court building with holding cells continues in use. It is difficult to state the last debtors imprisoned in Lincoln castle. There would have been a number of Community Charge non-payers imprisoned by the Magistrates before the closure of that courthouse who would have spent time in the cells before being taken to Greetwell Road Prison. Thereafter although most County Court business was taken at other locations, some civil business would be occasionally taken at the Castle along with the Crown Court work. Debtors would appear at the castle for non-payment of maintenance and taxes and failure to attend oral examinations. Again it committed or arrested on warrant they would be held in the dungeon- like holding cells. I know of a debtor who failed to deliver up his title deeds to enable an order for sale under a charging order spending a couple hours of a three month sentence in the cells at the castle until he changed his mind in circa 1998.
28 March 2010 at 12:52

The debtors prison for the City and County of the City of Lincoln was originally in The Stonebow which houses the Guildhall on the second floor. The present building was built between 1390-1520 but it replaced an earlier building on the same site occupied at some point between 1235-1390 (Medieval Lincoln p 206). The prison was in the East Wing until 1586 when it moved out of the main building to an adjoining house. Debtors were accommodated on the ground floor in two rooms at ground floor level, one 13 feet square for men and the other 8 feet square for women. There was a small 2 foot square gated window in each room through which passersby could pass food and drink. Howard described it as a “loathsome place, the worst in the kingdom”.

The 1809 Sessions House and gaol were rebuilt on the same site in 1843. Again the gaol went out of use except for holding cells in 1872. The holding cells continued in use for the city magistrates court until circa 1990. As the building was not used for county court purposes the last debtors to have been imprisoned there would have been Community Charge non-payers pending removal to prison. The 1843 building is now used by Lincoln College.

Since 1872 male debtors will have been imprisoned at Lincoln Prison at Greetwell Road. There was once but is now no female wing at Lincoln Prison and women debtors (if any) would be committed elsewhere. I do not have full information on this. If a woman was to be committed for debt today (i.e non-payment of taxes, maintenance, Uniform Business Rates or Council Tax or failure to participate with a Means Enquiry) from Lincoln she would be committed to HMP Morton Hall.