Further debilitations of Bankruptcy - expulsion from one's club! Not cricket at all. 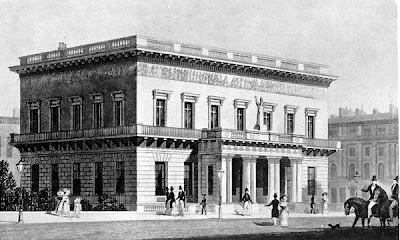 I have posted in recent weeks on the debilitations that come with legal state of bankruptcy. In addition to the general stigma that comes with the singular legal state, the specific debilitations can include; expulsion from the House of Lords, expulsion from the House of Commons, no chance of a career at MI6, and expulsion from one's professional body (although not the Bar).
It has now been brought to my attention that one can also be expelled from one's club if one is subject to a bankruptcy order. Such august institutions as the Savile, the Athenaeum (pictured - Basil Montagu QC, the father of modern insolvency law, was an early member) the Reform, the Travellers, and other less well regarded places, (i.e. the RAC), have as part of their rules the criterion that a member will be expelled if declared bankrupt. This makes sense of course as you cannot fall behind with your bar bill. That would not be gentlemanly behaviour. However, the other main Club rule in relation to behaviour and expulsion relates to criminal activity. Again there is a synthesis between fiscal embarrassment and criminal activity. This is a rather Henrician way of viewing the bankruptcy provisions. Would a one time member (but now bankrupt member) be forced to reapply and go through the election process again once discharge had occurred?
Picture Credit: http://www.victorianweb.org/graphics/places/athenaeum1.jpg