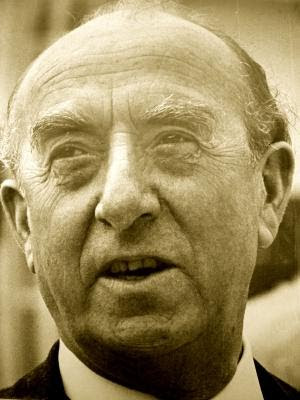 I have had the immense pleasure of reading the Lord Elwyn-Jones' biography whilst on my summer break. I commend it to all blog readers. His career was one of distinguished public service. As Lord Jenkins of Hillhead said, "His career of public service is the now rare classical example of a great lawyer politician—barrister at 25, MP at 34, QC at 43, Attorney-General at 54, Lord Chancellor at 64, and then ten years of exceptional subsequent devotion to this House in Opposition." Amongst many other activities he prosecuted at the Nuremberg Trials. His cross-examination of SS Standartfuehrer Wolfram Sievers on August 8, 1946 can be viewed here. As Lord Chancellor he occasionally spoke on bankruptcy issues. Here is one Hansard example:

"The best way of describing administration orders is as a poor man's bankruptcy, although the order does not have quite such a drastic effect as bankruptcy. The proposal meets the difficulty of the large number of debtors who get themselves into a situation where they owe money to a number of creditors, each amount in itself being very small, but where they would be faced with successive enforcement actions against them by those creditors to enforce payment of the sums due. An administration order allows the debtor to apply to the Office for all his debts to be brought to account and for him to pay one sum weekly or monthly to the Office, which will then distribute that payment among the creditors. The advantage for the debtor is that he is protected against his creditors, and the creditors do not have to wait in turn for payment."