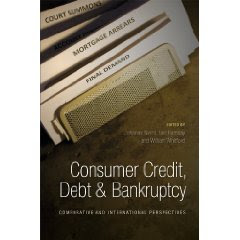 Hart publishing have published a new bankruptcy text. Here is the advertising material:

After a long period of prosperity and steady economic growth, the world's leading economies are now in crisis, and although there will be debate about its origins, the scale and seriousness of the crisis is in no doubt. There is also no doubt that excessive amounts of consumer credit, allied to a weak understanding of how globalised credit markets might react to a crisis, have played a significant part. This book, which is primarily about credit, debt and the trouble they have led to, is written by authors who have specialised in researching into over-indebtedness, that is, situations in which an individual's debt burden has become overwhelming.  For these authors the plight of individuals is a primary concern, but the wider issue is how credit is used and how it changes societies.

The essays in this volume, addressing topics which are fundamental to our understanding of the current crisis, range widely across the whole sector of consumer finance, including mortgages, 'credit-binges', the regulation of consumer lending, insolvency, repayment plans, debt counselling and much more besides. The conclusions drawn from the book are equally wide-ranging, but above all the lesson learned from these essays is that the financialisation of contemporary life ensures that issues of the appropriate role of credit remain of critical importance in society.