HOBS - escaping debtors in the King's Bench Prison in 1793 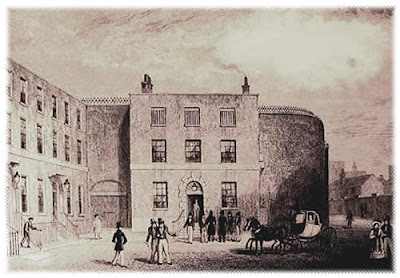 A case concerning the blowing up of the King's Bench prison, burning of houses, bloodshed and murder was heard in 1793. The case was entitled: The Rev Richard Burgh, John cummings, Esq., Captain in the Army, Townley M'Can, Esq, Student of Law, James Davis and John Bourne (1793) The Complete Newgate Calendar, Volume IV, at pages 188 to 192. The case is of note, not just because it involved Townley M'Can, a law student, but also because debtors were discussed in the case.
The conspirators were on trial because they had attempted to blow up the King's Bench prison (pictured) in an effort to escape. One passage is particularly telling in relation to how imprisoned debtors were perceived at the time by their 'fellow' prisoners. It is noted:

"M'Can afterwards opened the business to the witness. He said the plan in which he and the other prisoners were concerned was to effect their own enlargement by demolishing the walls of the prison, as they were determined not to be confined within those walls for debt...The prisoner Townley M'Cann produced an affidavit, in which he stated that he was a student of law, and had formed an opinion from several writers that imprisonment for debt was illegal; he disclaimed any criminal intention."

The prisoners were sentenced to three years imprisonment, but in different prisons.
Picture Credit: http://www.oldlondonmaps.com/oldlondonmapimages/shepperd/shep152.jpg

Anonymous said…
The involvement of Cummings may have more to do with "revolution" as is referred to in the Calender than debt- Captain John Cummings and Lieutenant William Cummings of the NSW Corps ,the 102nd Regiment, the Rum Corps,from Antrim, were involved in the 1804 Vinegar Hill rising of Irish rebels in NSW.
30 September 2009 at 15:58