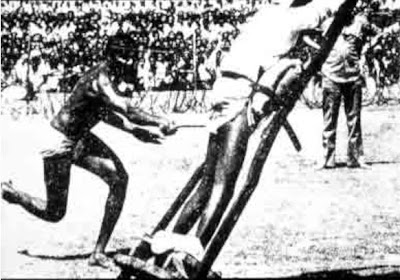 This is the second HOBS and it relates to the mid-eighteenth century treatment of bankrupts in China. In particular it relates to those bankrupts who had assets but did not divulge the location to the local Governor. In China, when any man became a bankrupt he would be thrown into the Governor's palace. He would then be required to give the whereabouts of his effects. If he did not disclose the whereabouts of his effects but items subsequently came to light, he would be punished in the following manner:

"the bankrupt is bamboo'd on the backside, if discovery is made of any of his effects of his (the punishment is such, as none, scarce survive; it is so grievous, that no person in all China may, of his own authority, inflict it upon another, upon pain of death, and confiscation of his goods.)" (from: Postlethwayt, Malachy, Universal Dictionary of Commerce and Trade.  The first edition of volume 1 (with the entry "Bankruptcy") was published in 1751. Publishers: John and Paul Knapton, London. 1751)

Similarly, if the bankrupt passed property to another and that individual (a third party) did not reveal the same, the third party was  "bamboo'd to death."
Picture Credit: http://www.bu.edu/bcrhhr/pro/course/images/torture2.jpg