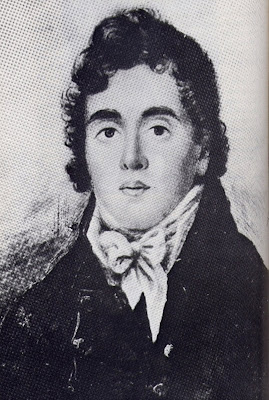 Elsewhere I have written at length about bankruptcy during the Regency period (see: one, two and three). One phenomenon of the period (and indeed many others!) involved the practice of fleeing one's creditors. One of the most famous exponents of this practice was the famous George "Beau" Brummell (pictured). As a friend of the Prince of Wales (later George IV) Beau was able to guide Regency fashion with his "elegance and style." Following a quarrel with the Prince, Beau fled to France in 1816 to escape from his creditors. He died in 1840 in an asylum for the insane.
Picture Credit: http://www.dandyism.net/wp-content/uploads/2006/11/beau-in-1815.jpg