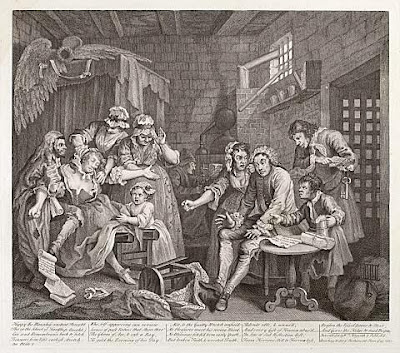 Sometime ago I posted on an interesting piece on the history of bankruptcy that had appeared in the New Yorker. A similar piece (albeit much shorter) has also now appeared in Time Magazine. See here.  Here is an abstract from the piece:

"With apologies to Apple Pie, bankruptcy is as American as it gets. From the earliest days of the Republic to General Motors' June 1 filing for Chapter 11, debt relief has been at the center of a tug-of-war between competing Yankee principles: reinvention and responsibility.

In Colonial America--where moneylending was governed as much by moral codes as by legal ones--defaulting on your debts was considered a moral failing. Accordingly, owing as little as 40 shillings (less than the price of a fine pair of bedsheets) could get you thrown into a Dickensian debtors' prison. Amid the financial turmoil that followed the Revolutionary War, however, delegates to the Constitutional Convention predicted the nation might need laws that would facilitate going belly-up in an orderly fashion. The first federal bankruptcy law, which drew on English statutes, was signed in 1800 and redounded to the benefit of at least one delegate: Robert Morris of Pennsylvania, who wound up $3 million in the hole after opening his purse to Washington's army and spent three years locked up.

Further legislative attempts were waylaid by interest groups and states'-rights advocates, who feared corruption and disagreed over whether bankruptcies should be regulated by the Federal Government at all. The Bankruptcy Act of 1898 expanded debt protection not just for creditors but for corporations as well, but as late as the 1970s, most highbrow firms still saw bankruptcy as an undignified fire sale. Looking to help steer more troubled companies back into the black, Congress simplified filing for both personal and corporate bankruptcy. The change got results: from 1980 to 2005, the number of bankruptcies increased sixfold. A stricter 2005 law made a dent in the number, but four years later, it's climbing once more."