Watch Out Law Professors About - the remuneration taboo stateside 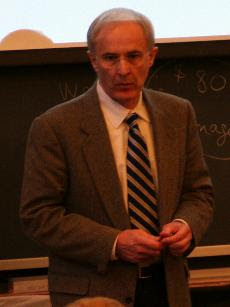 Professor Lynn LoPucki has made some interesting comments on the other side of the pond in relation to the Chrysler Chapter 11 bankruptcy that make interesting reading, particularly in relation to the remuneration taboo. The Bloomberg piece which has picked up Professor LoPucki's comments is entitled, "Chrysler Bankruptcy Lawyers Reap Fees Illegally, Professor Says" The piece notes:

"Bankruptcy lawyers who stand to make as much as $372 million in the reorganization of Chrysler LLC will be doing so illegally, according to a California law professor.

Attorneys are billing bankrupt companies for about 80 percent of their fees without first submitting the charges to the court, as required under the U.S. Bankruptcy Code, according to a study on the issue by the University of California at Los Angeles, “Routine Illegality in Bankruptcy Court Fee Practices,” which was released today.

In practice, judges often review the monthly fee payments later, because it’s time-consuming to scrutinize them every month, the report said. Such a lack of oversight has permitted bankruptcy attorneys and other professionals to raise their fees by more than twice the rate of inflation from 1998 to 2007, according to Lynn LoPucki, a bankruptcy law professor who co- wrote the report.

Bankruptcy lawyers have a “cavalier attitude toward the laws that regulate them,” LoPucki said in an interview. “They don’t seem to think the illegality of their practices is important.”

The UCLA professor is assailing a strategy that enables law firms to get paid promptly at a time when delays in fee approvals might further strain firms suffering from declining business. At least 30 of the 50 largest U.S.-based law firms fired lawyers and staff in the past 18 months as the recession slowed their corporate finance and merger work, according to data compiled by Bloomberg.

“After notice and a hearing, the court may allow and disburse to such applicant, such compensation and reimbursement,” LoPucki said, quoting the statute governing fees. “These people who are getting money are not yet even applicants,” as they haven’t asked the court for their fees, let alone waited for a hearing and a decision, he said.

“I think judges do it for their convenience because they are overwhelmed, especially in the big cases,” said Nancy Rapoport, a law professor at the University of Nevada, Las Vegas. “I agree that the foxes are guarding the henhouse, because lawyers don’t want to challenge other lawyers’ fees.”

Using a different database, bankruptcy law professor Stephen Lubben at Seton Hall University in Newark, New Jersey, puts Chrysler fees at about $200 million and GM’s at twice as much.

As opposed to the monthly fee requests, formal fee applications often are made in court months after a proceeding begins. In Lehman’s case, which started last September in New York, lead law firm Weil Gotshal & Manges LLP first sought formal approval last month for the $55 million it charged over its first four and a half months of work. LoPucki estimated New York-based Weil will make more than $200 million by the time the case ends.

Chrysler paid Chicago-based Jones Day $18.9 million in retainers from November to May, partly to try to keep itself out of bankruptcy. In court, Jones Day and other bankruptcy professionals have 120 to 150 days to ask the judge to approve monthly fees that will already have been paid by Chrysler, according to an April 30 court filing by the lawyers. Lead Chrysler lawyer Corinne Ball’s rate is $900 an hour, according to court records.

Lehman’s lead lawyer, Harvey Miller, whose partners at New York-based Weil charge the bankrupt bank about $824 an hour, declined to comment on LoPucki’s study, as did Charlotte Powell, a spokeswoman for Jones Day.

The 55-page study by LoPucki and Joseph Doherty, director of UCLA’s law-research group, the Empirical Research Group, took its data from fee payments in 102 of the largest public-company bankruptcies from 1998 to 2007, including WorldCom Inc., Kmart Corp., U.S. Airways Group Inc. and Delta Air Lines Inc.

“LoPucki is wrong conceptually and legally,” said Dewey & LeBoeuf LLP partnerMartin Bienenstock, who has advised GM and some of New York-based Lehman’s creditors. “The legislative intent of the Bankruptcy Code’s fee provisions is that bankruptcy lawyers should be compensated” promptly.

“To avoid judges spending time on fee hearings every month, many courts adopt a practice under which lawyers circulate monthly invoices and the debtor pays the amount that other parties, including the U.S. trustee, do not object to,” Bienenstock said in an e-mail. “Then, once every three or four months, the court makes determinations about the invoices to date.”

Jane Limprecht, a spokeswoman for the U.S. Trustee program that oversees bankruptcies at the Department of Justice, declined to comment.

Demanded fees rarely are reduced by judges, even though lower fees would leave more money for creditors, according to the study. Reductions averaged 1.3 percent of the total amounts requested.

In an exception, Weil’s Miller worked at investment bank Greenhill & Co. when he was appointed examiner of FiberMark Inc., which emerged from bankruptcy court protection in 2006. The judge slashed the fees after a critical report by Miller.

“Monthly compensation systems are put in place in virtually all of the big cases,” Seton Hall’s Lubben said. “Calling them illegal is pretty outrageous.”

“They will be disclosed at such time as the required interim fee applications are filed with the bankruptcy court,” he said in an e-mail.

“There is a sense of entitlement that a lot of lawyers talk themselves into because they are working 16 hours a day,” said Rapoport.

Here is the research paper that the article refers to.
Picture Credit: http://media.collegepublisher.com/media/paper609/stills/22e8e5t8.jpg