Interesting Article in the New Yorker discussing imprisonment for debt 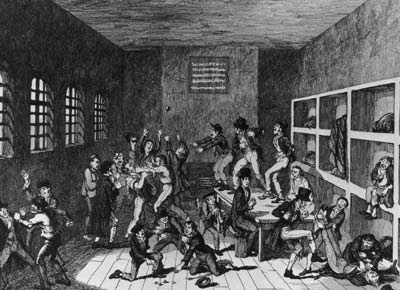 An interesting article has been published in the New Yorker which features a discussion of imprisonment for debt from an American perspective. Here is the citation: Jill Lepore, Annals of Finance, “I.O.U.,” The New Yorker, April 13, 2009, p. 34. Here is the abstract:

"It took more than an argument to abolish the institution of debtors’ prison. Parliament didn’t ban the imprisonment of debtors until 1869. Imprisonment for debt was abolished in New York in 1831; the rest of America soon followed. What was already replacing it in the late eighteenth century was something that has become a mainstay of American life: bankruptcy. Eighty-six hundred Americans filed for bankruptcy in 1946; nearly three hundred and fifteen thousand filed in 1980; and more than a million filed in 2008. As many as two out of every three Europeans who came to the American colonies were debtors on arrival. Some colonies were, basically, debtors’ asylums. By the seventeen-sixties, sympathy for debtors had attached itself to the patriot cause. The American Revolution, some historians have argued, was itself a form of debt relief. In 1787, just before the Constitution was drafted, New Yorkers formed the Society for the Relief of Distressed Debtors. They launched an investigation and found that, of 1,162 debtors committed to debtors’ prison in New York City in 1787 and 1788, 716 of them owed under twenty shillings. In 1758, New York’s debtors were moved to New Gaol, near what’s now City Hall Park. Describes the horrible conditions in New York’s debtors’ prison. In 1791, John Pintard, a state legislator and stockbroker, fell for William Duer’s financial scheme, which helped trigger the Panic of 1792, the nation’s first stock-market crash. Pintard eventually landed in debtors’ prison in Newark. The idea that debt is necessary for trade, and has to be forgiven, is consequent to the rise of a market economy. Americans fought to provide the same debt relief to everyone because we believe in equality and because bankruptcy protection makes taking risks less risky. Our willingness to forgive debt lies behind a good part of our prosperity. Pintard got out of jail in 1798, and he filed for bankruptcy in 1800. He went on to found the New-York Historical Society in 1804, and to help open the New York Bank for Savings in 1819. Mentions Joseph Dewey Fay. In 1841, Congress passed a sweeping federal bankruptcy law that offered bankruptcy to everyone. Meanwhile, in 1831, the New York State Legislature abolished imprisonment for debt. Other states soon followed. Debtors’ prison was abolished, and bankruptcy law was liberalized, because Americans came to see that most people who fall into debt are victims of the business cycle, and not of fate or divine retribution."